Ahmed Shah Durrani, also called Abdali, defeated the Marathas in the Third Battle of Panipat in 1761 C.E., a turning point in India’s history. The Maratha’s tremendous loss of manpower, momentum and prestige gave the East India Company enough room to build upon their recent victory in Plassey. Durrani was actually invited to invade India. Certain Nawabs, the Mughals and the eminent cleric Shah Waliullah were alarmed by the spectacular rise of the “infidels” and the decay of Muslim-ruled kingdoms recently. The Maratha Confederacy and the Sikh Misls (independent brigades) were growing in power. To crown it all, the once-great Mughal Empire had been reduced to a ridiculous city-state under Maratha control. Shah Waliullah wrote an impassioned letter on behalf of the malcontents to the powerful Abdali, who was anyway eyeing India, to “save Muslims from the infidels”. Abdali obliged them by invading India and slaughtering the stranded Marathas in Panipat. On his way back some Sikh units harassed his army. Durrani’s campaign of retaliation would be known as “Wadda Ghalughara” (Great Massacre), in which over 20,000 Sikhs were killed.

However, the Marathas and Sikhs endured. In the next three decades the Maratha chieftains gained control of large parts of India. The Sikhs Misls had also grown much stronger. The British were also ascendant, making strategic alliances with princes, bankers and merchants everywhere. Tipu Sultan in Mysore had been checked by the British about this time. Also, many Nawabs were being hard-pressed by the rising powers. Tipu, the Nawabs and fundamentalist clerics therefore sought help from the Durranis, using the “infidel threat” bogey. The Afghan king, Zaman Shah Durrani, was Abdali’s grandson. He was ambitious, had a large army and had many vassals in Western India. Durrani started preparing for the invasion and his probing attacks commenced in 1796.

Meanwhile, Tipu Sultan had also reached out to Napoleon Bonaparte to destroy the British. Napoleon saw the benefits of the alliance and planned to join Tipu once he finished his ongoing conquest of Egypt and West Asia. However, he was defeated by the British and the Ottomans in 1798 and had to abandon his Indian plans. Now the calls for Afghan intervention became urgent. Zaman Shah launched his invasion in earnest and marched to Lahore. Only eighteen-year-old Ranjit Singh, then the leader of a single Sikh Misl, was able to harry Zaman Shah. Unlike his grandfather (who faced the friendless and rash Marathas), the real enemy Zaman Shah would face was the well-connected, careful and crafty British.

At that point the Company was gingerly consolidating its new territories in India. In the North their dominion now extended to Awadh. Even the Marathas had been checked in the First Anglo-Maratha War, in 1782. The British had built strategic alliances all over India and abroad to safeguard the infant British Raj. When the Company got wind of the Durrani invitation they tasked a young officer named John Malcolm to persuade Persia to attack the Durranis. Utilizing a Persian agent, he spread the notion in the Shiite Persian court that Zaman Shah was committing atrocities on Shiites of Afghanistan and India. The Shah was goaded to attack the Durranis in their rear. When this proved unsuccessful and Zaman Shah invaded, John Malcolm went to Tehran. He brought lavish gifts and promised the full support of the British Empire to Persia. This mission succeeded and the Persians attacked. Meanwhile, Zaman Shah’s enemies at home took advantage of the Persian threat to ally with his half-brother, Mahmud Shah. This palace coup led to mass desertions from the Afghan army. Zaman Shah aborted his Indian invasion in 1800 and returned to Kabul. However, he was deposed and blinded by Mahmud Shah the next year. The British had eliminated a serious threat without firing a single shot.

Tipu Sultan died fighting the British in 1799 C.E. The Marathas were defeated and contained by 1818 – John Malcolm played a major role here also. The British deposed many Nawabs and reduced the rest to toothless vassals. The loss of state support quickly dampened the zeal of most clerics. Only the Sikhs held on under Maharaja Ranjit Singh’s adroit leadership. After he passed away in 1839 the Sikh Kingdom also fell. Now the British truly became the undisputed master of India.

Zaman Shah, who once dreamt of becoming the next Abdali, suffered perhaps the most ignoble fate of all. He was caught in the civil war between the half-brother who blinded him and a half-brother who protected him. This chaos made Zaman Shah take asylum with his old foe Ranjit Singh in 1810. Later he took asylum with the British, the very power which engineered his downfall. Zaman Shah lived out his remaining days in Ludhiana outliving Tipu, Malcolm, Ranjit Singh, the Persian Shah, and his own half-brothers. In 1844 he died a refugee in the very land he once sought to conquer.

PS: This is my article in Daily News & Analysis (DNA), published on November 26, 2017. Here’s the link to the original article. 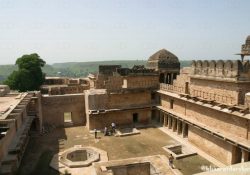 The Eastern Rajput groups such as Purbiyas, Ujjaynias and the Bundelas — based in present-day Madhya Pradesh, Bihar and Uttar Pradesh — emerged as major military forces in the 15th-16th century. Some of these began as feudal militia in breakaways states of the Delhi Sultanate, but others were Rajput clans that emigrated eastwards in previous centuries. Rajput ethos and local socio-religious beliefs about soldiering attracted thousands of caste men from eastern UP and Bihar. Despite the mercenary aspect, notions of honour and bravery were strongly adhered to. The outlook and fighting skills were highly valued and many powers sought their services. Sher Shah Suri, Rana Sanga, Bahadur Shah of Gujarat, Hemu, etc. fielded Eastern Rajput forces. These sovereigns were successful conquerors partly due to their ability to acquire such professional soldiers. Early 16th century India witnessed numerous conflicts; in this chaos powerful Eastern Rajput warlords carved out large domains — but this ascent would soon end calamitously.

By about 1525 CE, chiefs such as Medini Rai, Silhadi and Rudra Pradap ruled large areas in Central India. These lands were rewards for service, or were annexed through warfare. For instance, Purbiya lord Medini Rai rose through service to a Malwa Sultan, ultimately claiming Chanderi when the relationship soured. The households of these chiefs soon swelled with women from defeated noble families, many of them Muslims. While the relationship was not always that of master and servant or concubine, the mere presence of such women would be used by some enemies.

In 1526 CE, Babur ended the Delhi Sultanate in Panipat. He then defeated Rana Sanga’s grand alliance in Khanwa. Many Eastern Rajputs served Rana Sanga, but Silhadi, the Purbiya lord of Raisen, withdrew support before the battle. Perhaps this was due to Babur’s secret overtures to Silhadi. Medini Rai had remained true, but escaped the carnage. Babur then targeted the Afghans in the Gangetic Valley. For this, subduing Chanderi was important.

The Mughals besieged Chanderi in January 1528. Subterfuge and smart deployment caught Medini Rai unawares, and the defence collapsed. Medini Rai then unleashed the terrible twin-rituals of Saka-Jauhar. The women committed Jauhar. The men wore saffron and fought to the death after consecrating themselves in the Saka ritual. Subsequently, Chanderi became a base for Babur’s eastern wars.

Babur unexpectedly died in 1530 CE, and the Mughal threat subsided. Silhadi now allied with Bahadur Shah of Gujarat to conquer the Malwa Sultanate. The grateful Bahadur Shah invited Silhadi to his court. However, some nobles raised the matter of Muslim women in Silhadi’s household when he presented himself. Some accounts mention that this was arranged by Bahadur Shah as he feared Silhadi’s growing power. Previously, Medini Rai had released such captives when he was similarly charged, but Silhadi refused. He was imprisoned and was Raisen besieged in 1532. Silhadi’s sons, Bhupat and Puranmal, were fortunately away when this happened. The defenders, led by Silhadi’s wife Durgavati and his brother, held out stubbornly. Silhadi suggested that he would ensure surrender if he were sent into Raisen to negotiate. When Silhadi entered Raisen, he was shamed by Durgavati, who rallied everyone to die with honour. A Saka-Jauhar followed and all perished by fire or sword.

Silhadi’s sons retook Raisen after Bahadur Shah was killed in 1537. Bhupat’s death in 1540 elevated Puranmal as the lord of Raisen. Puranmal then conquered Chanderi with much bloodshed. At this point, Sher Shah Suri had toppled Humayun as Emperor. Accounts speak of Muslim women, who survived the conquest of Chanderi, demanding revenge for their husbands and enslavement of their kin. Anyway, Sher Shah had always desired Malwa and Bundelkhand. Sher Shah besieged Raisen in 1543. After an inconclusive siege, both parties discussed peace in a large camp outside the fortress — under oath of safe passage for the Rajputs and their families. Chanderi was restored to the widows and Puranmal promised fealty. Sher Shah marched off to Agra while the Rajputs remained encamped. However, Sher Shah was waylaid by the Chanderi widows who cursed him for sparing Puranmal. The clerics advised Sher Shah to break the oath to an infidel and he raced back to surround Puranmal’s camp. The trapped Puranmal beheaded his wife and ordered his men to kill their women and fight to the death. A terrible carnage followed, and except for a handful, thousands perished.

These events diminished the Eastern Rajputs. A few such as the Bundelas of Kalinjar survived, but chiefs of Medini Rai’s or Puranmal’s stature did not rise again. However, the regions from which they mustered armies continued to be a major source of manpower for the Mughals, Marathas and the British. Now, small clans engaged in military brokerage or ex-soldiers conducted the recruitments. Even this dominance ended following the 1857 Rebellion as many Sepoys from these regions mutinied. The British significantly shifted military recruitment from other groups now deemed as “martial castes”.

PS: This is my article in Daily News & Analysis (DNA), published on November 5, 2017. Here’s the link to the original article.