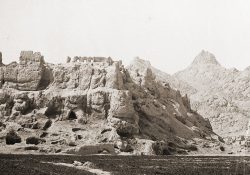 Today the term Kandahar evokes mostly memories of the IC-814 hijack. It appears infrequently in the news, in context of our projects in Afghanistan, or terrorist attacks. However, for a long time in history the affairs of Kandahar commanded considerable attention in India. Afghanistan was the favored overland route to India – for both trade and war. This in turn hinged on control of Kandahar, just as much as Kabul which dominated the Khyber Pass route. Over the centuries many powers threw their armies against the walls of Kandahar to control this fulcrum. The city also became the center-piece of endless intrigue and diplomacy. However, the bloodiest conflict of all was between the Mughals and the Safavids of Iran. For the Safavids, the obsession with Kandahar would eventually lead to their downfall. 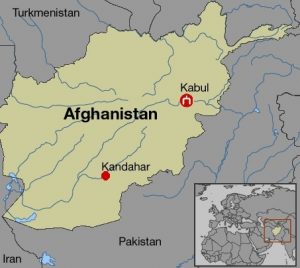 Why was Kandahar so important? In south central Afghanistan, a large swathe of alluvial land lies at the confluence of two rivers. The fertile soil, the climate, and irrigation enabled dense settlement. The origin of the name is still debated but old Kandahar was founded here in ancient times. Today’s Kandahar is however recent, founded about 300 years ago. Khorasan (present-day northeastern Iran, north-central Afghanistan and Turkmenistan) was a hotly contested region for millennia, and Kandahar was key to its control. Moreover, Kandahar was a major traffic junction. The ancient southeast road passing through Kandahar connected Khorasan to India. The northeast road connecting eastern Iran to Kabul (and onward into India) also ran through Kandahar. Kandahar therefore developed into a bustling, well-fortified emporium and many competing powers vied for its control down the centuries. However, it was the simultaneous rise of the Mughal and the Safavids that brought the tussle to unseen levels.

The Safavids (1501-1736) had forged a separate identity for Iran by vigorously promoting Shia Islam. They also inherited the ancient Iranian fear of Central Asian marauders. Control of Khorasan, through Kandahar, was deemed indispensable. Moreover, controlling this emporium would bring great riches. Kandahar could also be a springboard for invading India: after all there were Shiite kingdoms there actively seeking Safavid intervention. On the other hand, the Mughals owed their ascent to possession of Kabul and Kandahar; they also understood Kandahar’s strategic value and the threat from the west very well.

In the 16th-17th century, Kandahar changed hands multiple times, but trade and commerce resumed every time. In 1522 C.E., Babur captured Kandahar, defeating the local dynasty and the Safavids. His son Humayun was forced to hand it over to the Safavids in 1543, in return for their support during his exile. In two years Humayun rebuilt his power and captured Kandahar. Safavids perceived this as a betrayal but Humayun managed to contain the damage.  Humayun suddenly died in 1556 and in the ensuing confusion the Safavids captured Kandahar. Akbar managed to retake Kandahar through subterfuge in 1595; his death in 1605 prompted a futile Safavid invasion. The Safavids wrested Kandahar from Jahangir in 1622. In 1638, a defecting Safavid commander handed over Kandahar to Shah Jahan. Ten years later the Safavids recaptured Kandahar in a determined campaign. Mughal attempts to retake Kandahar failed colossally: by 1653 Shah Jahan ceased all attempts. Aurangzeb also desired re-conquest but geopolitics, rebellions and the Deccan wars stood in the way. 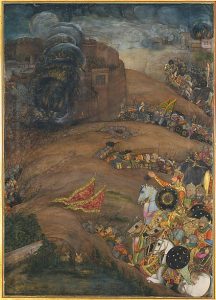 A Siege of Kandahar

The Safavid success was rather short-lived; their obsession with Kandahar led to oppression of the local tribes. The rapacious Georgian governor and Safavids’ religious zeal made things worse: Kandahar soon became the spearhead of Safavids’ ruin. The region was populated by the Ghilji and Abdali tribes who bore the brunt of Safavid imperialism. Under the Ghilji chief Mirwaiz Hotak and his successors, the Kandahar Afghans overthrew the foreign yoke in 1709. By 1722 the Hotaks swept into Iran and established Afghan rule, practically eradicating the Safavid line. The Hotaks reigned till the Iranians rebounded in 1729 under Nadir Shah. The Afghans were pushed back to Kandahar by 1738. After conquering Kandahar, Nadir Shah ordered the complete destruction of the city. Kandahar would however get a second life when Ahmed Shah Abdali established his empire in 1747; a new Kandahar was built next to the ruins of the old. Meanwhile, the Mughals weakened and many contenders scrambled for power. As feared, control of Kandahar now enabled massive invasions of fractured India. Nadir Shah’s terrible invasion of 1739 practically ended the Mughals. Abdali’s seven invasions between 1748 and 1767 also claimed many lives and crippled the Marathas, thus paving the way for British ascent.

Subsequently, many powers tried to control Kandahar – for varying reasons – but ultimately everyone reaped disappointing results. Events in modern history have eroded the strategic value of Kandahar, but it still is a prized objective for many. Today, despite endless crises and bloodshed, Kandahar endures – in a fashion.

PS: This is my article in DNA, published on April 29, 2018. Here’s the link to the original article. 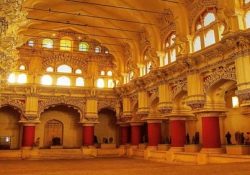 The Vijayanagar Empire was decisively defeated by the Deccan Sultanates in the Battle of Talikota, in 1565 C.E. The empire soon unraveled when many provincial governors, called Nayakas, declared independence one by one.  Even before the last emperor died the Nayakas were at each other’s throats, making opportunistic alliances, and seeking the support of Europeans and even the Sultanates. Tanjavur and Madurai, once key constituents of the empire, engaged in a protracted and destructive conflict which eventually doomed both ruling dynasties. 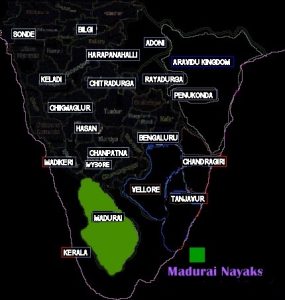 The reasons behind the rivalry were many. Tanjavur Nayakas hailed from a noble house which strongly supported Vijayanagar even during the empire’s terminal decline. The Madurai Nayakas were of humbler origins and had changed colors right after Talikota. In 1614 C.E., Madurai sided with a usurper who murdered the Vijayanagar emperor and his family. By 1659 Madurai’s expansionist activities led to the Sultanates annexing any remaining Vijayanagar crownlands: this reduced the last emperor to a refugee. Such actions also led to the Tanjavur kingdom losing lands to the Sultanates. Madurai’s alliance with the Sultans enabled roving Deccani Muslim warlords to quickly gain power in Tamil lands. Legends also say that a Madurai Nayaka murdered his bride, a Tanjavur princess (who was offered as a token of peace), in a moment of rage. The feud grew over the years – interspersed with very brief alliances of convenience – and reached a climax in 1673 C.E.

Tanjavur was then ruled by the ageing Vijaya Raghava Nayaka. He was a patron of the arts and had written numerous poems and dramatic works. However, he believed in hoary notions of tradition, valor and honor – he even refused to modernize his army with firearms. The ruler of Madurai was the young Chokkanatha Nayaka. He had actually attempted to check the growing power of the Sultanates and the warlords but failed. In 1673 Chokkanatha requested the Tanjavur princess’s hand in marriage. The Tanjavur king contemptuously refused; the enraged Chokkanatha ordered his generals to capture the princess. Madurai’s army consisting of Deccani cavalry, musketeers, cannons and European mercenaries simply outclassed Tanjavur’s army. Tanjavur fort was breached after heavy fighting; despite multiple offers of lenient terms Vijaya Raghava resolved to “die with honor”. The royal palace was rigged with gunpowder and incendiaries and the royal womenfolk were herded into it.  As the defenders sallied out and fought to the death they blew up the palace, killing everyone inside. Chokkanatha installed his brother Alagiri as a viceroy. However, Chengamaladas, a minor son of the fallen Tanjavur King, had escaped the carnage. 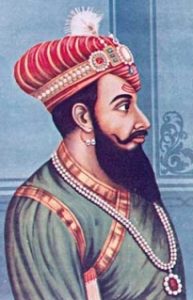 Chengamaladas later surfaced in Bijapur and requested the Sultan’s aid. In 1675 C.E., the Sultan sent his general Venkoji, half-brother of Chhatrapati Shivaji, to reclaim Tanjavur for Chengamaladas (Ironically, Venkoji and his Maratha troops served Bijapur while Shivaji was invading it in the north). It was an opportune moment as Alagiri and Chokkanatha were now at war with each other. Tanjavur was conquered by the Marathas in a short campaign. However, heeding to a prophetic dream (and perhaps sensing the Bijapur Sultanate’s impending end) Venkoji crowned himself King of Tanjavur in 1676. With Chengamaladas fleeing into obscurity the rule of the Tanjavur Nayakas ended.

Meanwhile in Madurai, rebellions and Chokkanatha’s plummeting popularity weakened the kingdom. The expansionist Tanjavur Marathas now began to prey on Madurai. Chokkanatha was deposed by the Madurai nobles and another brother was enthroned. In 1680, a powerful Deccani warlord named Rustam Khan captured power, chasing away the new Nayaka and installing Chokkanatha as a puppet ruler. Rustam Khan’s power grew alarmingly and he apparently began to forcibly claim women from the royal families. The enraged Madurai nobles ambushed and killed Rustam Khan and his followers in one swoop. In 1682 Chokkanatha Nayaka’s heart finally gave out when Madurai was repeatedly invaded by her neighbors, and subsequently betrayed by her feudatories. The Madurai kingdom was totally devastated at this point. Chokkanatha’s teenaged son Rangakrishna managed to reclaim some glory but he died of smallpox just seven years into his reign. Queen Mother Mangammal became the Regent for the next fifteen years as Rangakrishna’s heir was an infant. Mangammal’s brilliant leadership bought Madurai back from the brink. Using diplomacy, stratagems and military might, she eliminated major threats and rebuilt Madurai’s power. However, after her death in 1705 the kingdom went into decline again. Madurai was slowly worn down by civil strife, and the campaigns of Tanjavur, Mysore and the Nawab of Arcot. In 1736, Arcot forces under the famed Chanda Sahib occupied Madurai, ending centuries of Nayaka rule.

Madurai was subsequently tossed between various belligerents till the British became her overlord in 1764. The Marathas of Tanjavur fared slightly better. Despite Mughal attacks, incessant wars with its neighbors, and increasing subservience to the British, it plodded on in relatively good order. In 1855, Tanjavur lapsed into British rule when the last Maratha king died without a natural heir.