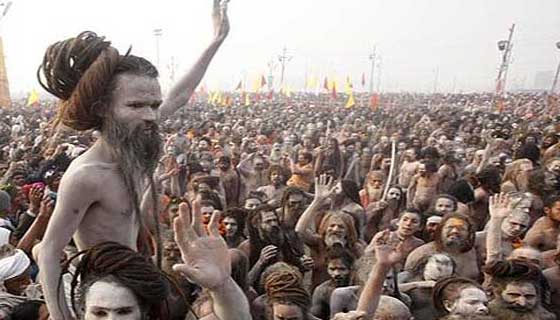 In twelfth and thirteenth centuries a number of armed ascetic orders such as the Dasnamis, Satnamis and Naths emerged from erstwhile reclusive religious spaces. The loss of respectable lifestyle tied to temples and state patronage, following the foreign invasions of the previous century, had perhaps led to this evolution. Some orders were newly founded to resist invaders bent on iconoclasm and forcible conversion. These orders soon controlled major trade routes and access to major pilgrimage sites. Caste was not much a concern for these orders and core principles were based on the Saiva and Tantric streams. Many orders utilized Haṭha-Yoga and other physical training routines to prepare themselves for both ascetic life and combat. The training regimes nurtured in the orders’ Akharas (training congregations) were reportedly similar to military drills. The militarized orders did not hesitate to contest state power, or fight between themselves, to preserve their interests. Some orders were mobile, roving across different regions and a few of these gained notoriety as mercenaries, albeit with a mystical veneer.

While the relationship between these orders and Muslim and Hindu kingdoms oscillated the British turned out to be another matter: revenue collection was always their overriding objective. Till the mid-nineteenth century, the armed orders stoutly resisted rising socio-economic control by the British. Bankim Chandra’s Anandmath, featuring the Sanyasi Rebellion, drew from this history. The Haṭha-Yoga practicing orders were perceived as prime threats due to their physical prowess and organization. It took the British over a century to eliminate or disband the orders. A handful managed to survive by relocating to remote locations where they could retain their core practices. Most renounced their militarized nature and settled as seminaries, still calling themselves Akharas. A popular disdain for such orders developed following these events. To survive, many Yogis were forced to become road-side performers: the training they once utilized for asceticism and combat was now used to shock and amuse. These displays became a source of both fascination and repulsion for foreigners; the Yogi lying on a bed of nails became the defining image of India. Modern Hindus chafed at this portrayal and assigned blame on the Yogis. Orthodox Hindus following purity and pollution norms largely avoided the caste-less Yogi. Additionally, the British were also wary of Yoga due to its association with their old enemies. Visibility and acceptance of yoga suffered and proponents of yoga positioned it as mere meditation rituals.

However, as a result of unintended consequences Yoga soon re-emerged. Victorian era had ushered in the idea of “Muscular Christianity”, coinciding with the rise of fitness culture in the West. The belief of “sound mind in a sound body” gelled with nationalistic ideas of “defense through strength” and emerging eugenics. Also, colonial interests necessitated portraying strong conquerors against conquered weaklings. Consequently, Indians were depicted in demeaning manner: many of these portrayals persist to this day. These factors, and the colonial yoke itself, provoked many Indians to promote India’s own Yoga by developing a culture of nationalistic physical prowess. The efforts of Aurbindo Ghosh, Swami Raghavendra, etc. soon created an evolved, modern Yoga. Here, modern practices and training regimens were developed and blended with ancient principles. Some schools of Yoga, and certain popular Asanas of today were rebooted, if not invented, in modern times. The global physical culture wave also helped increase the acceptance of Yoga in this period. The martial nationalism of these modern Akharas attracted many and soon influenced organizations such as the RSS and Arya Samaj. Yoga also became a cover for training religiously inclined revolutionaries. Early revolutionary groups, such as Anushilan Samiti and Jugantar displayed institutionalized militancy and rigor similar to the ethos of the old orders. Yoga was in the government’s crosshairs again and revolutionaries had to disguise themselves as travelling gurus, dispensing training in new Akharas disguised as gymnasiums. Both modern Yoga and military training was combined under the heading of “Yoga” to evade detection. Brazilian Capoeira was similarly secretly developed and disguised as dance to prevent colonial crackdown.

The militant nationalistic streams never became as popular as the mainstream national movement. Therefore, the efforts to create an army of trained Indians to forcefully wrest power never materialized – and by the mid-40s independence was in grasp. However, these efforts of the covert and overt proponents of Yoga had successfully created a system which produced many Yoga luminaries, thereby leading to global popularity of Yoga. Naga Sadhus and other Akharas, more visible today due to Kumbh Mela and the new socio-political scenario, are the remnants of the armed orders of old.

PS: This is the original version of my first article in Daily News & Analysis (DNA), published on July 16, 2017. Here is the link to the published article.