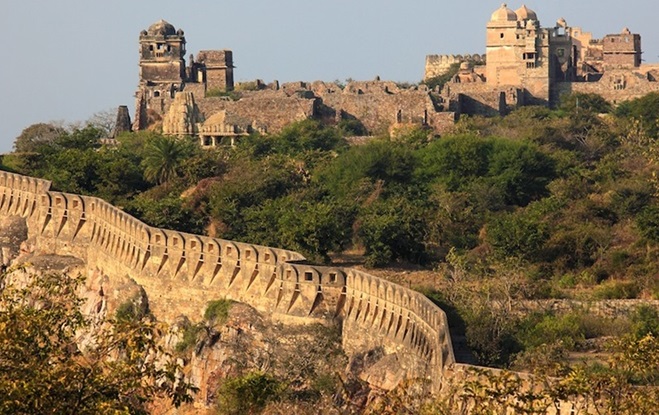 Malik Muhammed Jayasi’s Padmavat (c. 1540) is an epic poem which wove together bits of history, fantasy tropes and Sufi ideology. Acutely Sufi themes such as man’s vanity and desire for the ephemeral were overlaid on a historical episode — the Delhi Sultanate’s invasion of Chittor in 1303 C.E..

Today, elements of this mostly fictional poem have been deified into very emotive and politically charged truths. The popular narrative is that of “honorable Rajput men and women triumphing in death over marauding Muslim invaders”. The “martyr queen” is seen as an icon of chaste Hindu womanhood. The Chittor carnage courtesy Sultan Alauddin Khilji, the subcontinent’s favorite bogeyman, is a well-recorded fact. However, the currently enshrined narrative is quite certainly false.

The distortion of true events into legend, and legends being enshrined as the truth are well-observed phenomena. Down the ages, elements and themes from such legends flow across cultures and regions. In this regard, the Sindhi folk legend of Dodo-Chanesar could be observed alongside the Padmavat. Similar themes of Rajput valour (albeit of the Muslim Rajput variety) against foreign imperialism, royal traitors, “purity and honor of our women”, mass suicide, elements of fantasy and the evil Alauddin Khilji are overlaid on a sliver of history — the Delhi Sultanate’s Sindh expedition of 1298.

The Padmavat’s storyline is too well known to repeat here. However, the Sindhi tale of Dodo-Chanesar, set during the reign of the Soomra dynasty, is not so well known outside the region.

The Soomra dynasty, which ruled most of present day Sindh, were Muslim by faith but followed many Hindu Rajput traditions. It is believed they were one of the Rajput groups which converted to Islam sometime after the Arab Caliphate conquered Sindh in the eighth century. The Soomras had been ruling with the support of other Muslim Rajput groups ever since their overthrow of the Ghazni yoke sometime between 1024 and 1040 C.E..

As there are numerous and contradicting versions of the Dodo-Chanesar legend, we sequence together major elements from the more popular versions:

A Soomra king had two wives, a blacksmith’s daughter and a Rajput noblewoman. The former bore a son named Kamaluddin Chanesar and a daughter named Bilqees “Bhaghi”. Sometime later, the Rajput wife delivered a son, on the same day the king died in a battle. This son was named Asad-ul-Millat Dodo. A regency was appointed to rule till the princes came of age. They grew up wary of each other, amid palace intrigue—but the beautiful and spirited Bhaghi was loved by both. Years later, prince Dodo was chosen as the sultan under pressure from the nobles. Prince Chanesar was elder but lowborn and hence unacceptable to the Muslim Rajput lords.

A seething Chanesar left for Delhi and sought the aid of Sultan Alauddin Khilji. In return, Chanesar would acknowledge the Delhi Sultan as his suzerain and also marry his sister to Khilji. The sultan agreed, and a large army led by general Zafar Khan invaded Sindh. Sultan Dodo and the Rajput lords rebuffed the negotiation attempts; the traitorous pretender (who promised their princess to a “caste-less Turk invader” at that) was beneath contempt. Despite heroic defence, the Sindh armies were destroyed and Sultan Dodo fell, taunting Chanesar even as he was impaled high on Turkish spears.

Most of the noblewomen, including Princess Bhaghi, were evacuated from the capital and placed under the protection of Jam Abro Samma, a prominent Jam (lord) from the Samma Rajput clan. Zafar Khan sacked the capital and planned to capture the princess to present her to Khilji. Then, understanding the vile nature of the Turks, Chanesar turned on them and died fighting.

The sultanate’s army then laid siege to Jam Abro’s fortress in Kutch. The outnumbered Rajputs chose death over dishonour. Being Muslims, they did not follow Hindu twin-ritual of Saka-Jauhar; they instead set fire to the fortress—with the assent of the women inside—and rode out to fight to the death. (Fantastic versions of the legend say that Bhaghi also rode out, disguised as a man, to fight and die. As the women cried out in anguish the earth split asunder and swallowed the fortress and the mountains surrounding it!). The victorious Turks entered the fortress and all they found were ruins and charred bones. The aghast Zafar Khan retreated to Delhi, lamenting the futility of it all and deeply mourning the dead. Some versions end with the remaining Turk invaders dying of thirst in the deserts of Sindh

History, however, tells an entirely different story. Sources mention that the Soomra rulers had accepted suzerainty of the Delhi Sultanate during the reign of Sultan Iltutmish (r. 1211-1236). Around 1297-1300, the Soomra dominion, i.e. present day southern Sindh, was ruled by a certain Jam Chanesar. There was apparently no Sultan Dodo in the picture, at that point of time. In fact, Jam Chanesar is the subject of a more famous frontier ballad, the Lilan-Chanesar.

In this period, Zafar Khan, one of the great generals of Alauddin Khilji (r. 1296-1316), did indeed lead an expedition into Sindh. However, the objective was to intercept a Mongol army that had encamped itself in Sindh. The Mongols were defeated and Zafar Khan withdrew from Sindh. It is not known if Chanesar had requested the sultanate’s aid against the feared Mongol scourge—or if Sindh had allied with the Mongols thus warranting imperial intervention. Previously, Zafar Khan had waged war in Multan and Uch in the lower Punjab—and also northern regions of present day Sindh—right after Alauddin Khilji murdered his uncle, Sultan Jalal-al-din Khalji, and captured the throne. Arkhali Khan, son of the slain monarch, was ruling over these provinces. The entire Jalali family and its supporters were destroyed after much fighting in these regions.

Similarly, the historical record of Khilji’s Chittor invasion is very different from the Padmavat. Khilji understood that he had to neutralize his fierce Rajput neighbors. He also had dreams of becoming a great conqueror like Alexander. After the Rajput kingdoms of Gujarat and Ranthambor were successively conquered his eyes fell on Mewar, the most powerful Rajput state of all. Mewar’s capital Chittor fell in a few months. Figures such as Rani Padmini and Raja Devpal do not appear in the contemporary historical sources. Neither does episodes such as the Chetan Raghav’s flight, the daring Gora-Badal mission, the Ratan Singh-Devpal duel to the death—and the much vaunted Jauhar.

In fact, Ratan Singh is variedly recorded to have either fled the battlefield or being pardoned by Alauddin Khilji. Jayasi’s Padmavat ends with the chastened Khilji holding the ashes of the dead and ruminating philosophically, mirroring Zafar Khan’s sentiments in the Dodo-Chanesar legend. However, contemporary sources note that when Chittor fell Khalji simply ordered a complete massacre, and quickly set upon creating a new administration for Mewar.

On the creation of legends

Centuries of violence and near-continuous dominance by outlanders probably left a mark on Rajasthani psyche. The Alauddin Khilji juggernaut had ravaged Rajasthan, killed tens of thousands and destroyed many proud Rajput kingdoms. The Rajputs rebounded later, only to fall under Mughal control afterwards. When the Mughal fetters weakened, the Marathas suddenly muscled in. Later, the weary rump kingdoms had to accept the dominance of yet another outlander, the British. Legends of valour and defiance, the hand of fate and crippling betrayals became overlaid on the series of defeats. Besides Padmavat and Dodo-Chanesar there are other epics which contain similar themes—against the backdrop of Alauddin Khilji’s imperialism. For example, the Kanhadadev Parbhand focuses on Jalor’s defiance, and the Hammira Mahakavya narrates Ranthambore’s poignant struggle. In all of these, history was distorted, fictitious people and events were added and extraneous themes were injected. New “truths” became enshrined.

The Padmavat was adapted by numerous authors down the centuries, the first known adaptation was Pema Nama, written in in the Bijapur court in 1592. Widely diverging adaptations were produced all over the subcontinent. The Sufi adaptations were quite allegoric in nature, while other adaptations stressed on fantasy or love and romance. Some of the authors had been patronized by Rajput kings and nobles; these authors naturally highlighted Rajput glory and valor. Also, much artistic license was employed by poets and bards who popularized the story among the people.

The role of Charan poetry and Bat narrative accounts in the propagation of Rajasthani legends is well known: the Padmavat passed through these mills also. Poems such as Gora-Badal Padmini Chaupai (c. 1589), Padmini Carit and Gora-Badal Ki Katha added new elements and vignettes and popularized the story further. The Vamshavalis (genealogies) and Khyats (panegyric histories) commissioned by royals also latched on the popular narratives to gain legitimacy—and to paper over not-so-flattering incidents of the past. The influential works of James Tod, an admirer of past Rajput glory, also helped propagate the mythologized story across India. And during the Indian national movement, the narrative of Rajput defiance and the stoic bravery of Indian women against foreign marauders was propagated all over India.

Similarly, the Dodo-Chanesar story developed into a rousing ballad contrasting Muslim Rajput valour against Turkish villainy. Unlike the Padmavat, the Sindhi legend was not written down. It was not adapted and propagated by medieval and pre-modern authors. Itinerant bards and rural performers played a major role in the propagation of this legend across Sindh. Consequently, many versions of unknown authorship exist. Due to these factors most scholars classify the Dodo-Chanesar story as mere folklore.

Nevertheless, the themes and the trajectory of legend-formation mirrors the Padmavat. The Soomras, Rajput sons-of-the-soil, are icons of Sindh ethno-nationalism due to their victory over the Afghans and their defiance of invaders. The caste and regionalism factors notwithstanding, it is not entirely clear why the Delhi sultans were portrayed as “vile Turks”. The Khilji ascent was in fact a Bhumiputra revolution against the highly racist system run by the Turkish clique. Many non-Turkish groups long settled in India (the Khilji tribe themselves were one of these), and Indian converts to Islam staged this coup against a system fixated on Turkish blood and noble pedigree. The Zafar Khan expedition against the Mongols was not described as being particularly bloody. Also, the previous campaign against the Jalalis also did not affect most of Sindh. Zafar Khan himself was a well-respected general, commanding even many Hindu forces, and he definitively did not die of thirst in Sindh (in 1299 C.E., he fell in battle saving the subcontinent from a great Mongol host that advanced as far as Delhi).  However, Muhammed Tughlaq and Firuz Shah Tughlaq did wage terrible wars in Sindh a few decades after Khilji’s death. Such involvements and campaigns by the Delhi Sultanate during Soomra rule must have made an impact on the Sindhi psyche.

While Dodo-Chanesar is largely unknown outside Sindh, the Padmavat was recently at the heart of pan-Indian controversy. The recent eponymous movie unfortunately follows the mythologized narratives. It highlighted some regressive aspects and resorted to negative stereotyping.

The impetus behind the original legend-formation was not malevolently regressive and anti-Muslim, but it nevertheless enabled subsequent toxic interpretations and adaptations. The politics of caste and religion also played its part. The violence and agitations unleashed by the Rajput Karni Sena and other organizations have subsided, but it has also set a fresh precedent for groups obsessed with real and imagined pasts.

This is the Information Age—the age of smartphones, of YouTube, Facebook and Twitter. Factors such as pervasive social media campaigns, viral content, targeted ads, sophisticated video/picture editing software, echo-chambers (where one can find kindred spirits from half-a-world away), and online anonymity are very powerful. Recent events, from Tahrir Square to the US presidential elections and beyond, have shown how quickly ideas, rumours and lies can spread like pandemics—sometimes with detrimental impact. Distortion of the truth and creation of alternate truths would definitely not require the centuries it took for the medieval tales.

PS: This is a slightly edited and expanded version of my article in The Mint, published on February 25, 2018. Here’s the link to the original article.