Kings, nobles and warlords have always imported mercenaries. Distrusting their own subjects, they placed faith on forces answering only to their benefactor. Through the ages, skilled and well-knit mercenary units have held inordinate power. Sometimes such units become so powerful that they turn on their employers on perceiving any threat. Sometimes, they even captured power. In India also, well-knit bands of Afghan, Turk, and African mercenaries have made great fortunes and captured power. On the other hand, Arab mercenaries entered quite late in the game, when British supremacy already emerged. Before the Arabs could expand their power in India – like so many foreign groups before them – their own benefactors and the British cut them to size. However, their power and influence completely ended only in 1948. 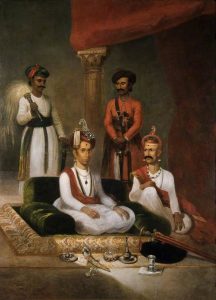 The Sultans of Gujarat and the Deccan began employing Arab mercenaries in the 16th century. However, it was the Maratha campaigns of the 18th century that led to a huge influx. Arab mercenaries mostly hailed from the Yemen’s Hadhramaut region, a land known for bold and enterprising people. In the service of the Marathas the Arabs gained reputation as extremely skilled and reliable fighters. Thousands of Arabs served Maratha chieftains such as Scindia, Bhonsle and Gaekwad. Arab agents opened recruitment agencies in Indian ports, and some of these agents became very wealthy. Indian financiers also established ties with the Arabs to expand influence in Indian kingdoms. Tribe and Clan conflicts from the homeland existed in the mercenary units but this did not dent their efficacy or their luster. An Arab trooper was paid thrice as much as a Deccani/Maratha trooper, and even more than a European mercenary. However, their service depended entirely upon the regularity and size of the pay. When arrears mounted, the Arabs turned on their employers till they received their dues. In one instance, the Arab mercenaries even intervened in a political crisis in Baroda state. They imprisoned Maharaja Anandrao Gaekwad and his faction had to invite the East India Company’s army to retake control. The British were aware of the threat posed by the Arab forces – and the Anglo-Maratha wars soon demonstrated how deadly Arab units could be. There were only about 10,000 Arab mercenaries, but this could grow into a much greater threat very soon. When Britain finally won Anglo-Maratha wars in 1818, she ensured that the Arab mercenaries were disbanded. The British even paid the arrears so that the Arabs could leave immediately. However, India-born Arabs and Arab descendants had no place to go to. These Arabs found a new benefactor, the Nizam of Hyderabad.

By the 19th century, the Nizam had become a loyal British ally. In return for true sovereignty, the Nizam could keep his crown. In 1818 the Nizam requested the British to let him employ the remaining Arabs.  The request was granted, and the Arabs moved into Hyderabad. The Arabs began service as guards but soon ascended into frontline infantry. They soon dominated the security industry and became financiers, bureaucrats, policemen and tax collectors. Arab commanders became very powerful and one such commander, Umar Al -Qu’aiti utilized his riches to establish power in Yemen. The meteoric rise of the Arabs now troubled the Hyderabadis. The British were also very uneasy; they clamped down on Arab migration into Hyderabad. 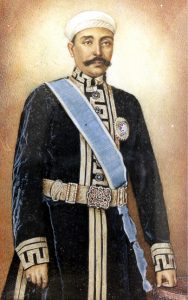 At this point the very able Sir Salar Jung was appointed Diwan, in 1853. The Diwan’s reforms modernized Hyderabad. With a mix of immense payoffs and stern action, Arab power was slowly dismantled. Arab commanders’ attempts to interfere with administration or cause trouble were quickly suppressed. The Arab commanders who submitted were offered rich prizes. Such commanders were also given access to British ports: the Empire also granted support for their schemes in Yemen. The 1857 Rebellion brought immense pressure on the Nizam and his forces. Many preachers and nobles compelled the Arabs to fight the British. The Arab commanders firmly stated that they were here just to make money – probably they realized that the British were too strong to dislodge. In fact, they crushed the attack on the British residency in Hyderabad and screened Hyderabad’s borders from rebel incursions. The grateful British awarded the Arabs immense resources, enabling the Qu’aitis to conquer Yemen and establish a Sultanate.

Arab descendants and fresh recruits from Arabia continued to serve Hyderabad into the modern age. Operation Polo became the end of it all. In September 1948 the Indian Army crushed the Nizam’s forces and liberated Hyderabad. Hyderabad’s army was led by Hadhramauti-descent Syed El Edroos; many Hyderabadi soldiers were pure Arabs or of Arab descent. Over 7000 Arabs were quickly deported to Aden. Many officers and courtiers of Arab descent emigrated to Pakistan. Thousands of Arab descendants live in Hyderabad today, the remnant of the Arabs who once held great power and prestige in India.

PS: This is my article in DNA, published on August 5, 2018. Here’s the link to the original article.