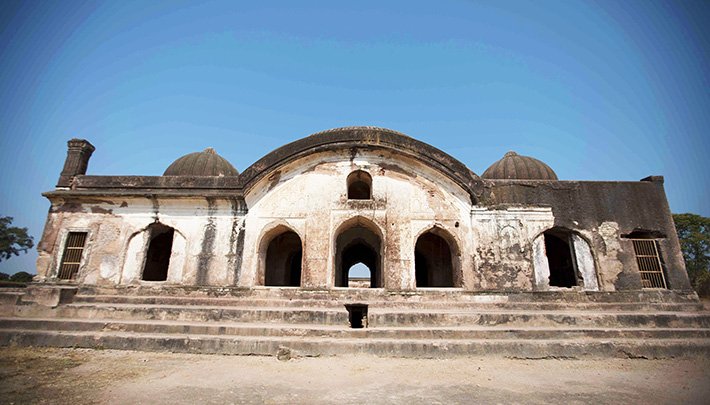 In India, one can scarcely travel a hundred miles without encountering a clump of ancient or medieval ruins. Except historians or the odd local enthusiast, few cares about these monuments. Most of the monuments maintained by the Archaeological Survey of India enjoys the splendor of only rickety notice boards, peddlers and guides spouting suspiciously ornate trivia. Around Burhanpur, a small city in Madhya Pradesh, there are a hundred such ill-maintained but still impressive monuments. However, Burhanpur is not part of India’s well-known tourist trails. Few are aware that Burhanpur served as a frontier capital and briefly hosted the imperial court of the Mughal Empire. The short-lived imperial splendor also brought much riches, drama and tragedy to Burhanpur.

A sizeable settlement existed in this location since ancient times. There are local myths connected to Sage Bhrigu and Ashwatthama. Burhanpur city was founded as the capital of the Sultanate of Khandesh in 1399. Khandesh straddled the Tapti Valley and had the Satpura ranges to its north. Burhanpur was thus the “Gateway to the South”. Moreover, it was a nexus of India’s medieval trade-routes. This was also the best staging zone for any southern campaign; an invasion force would have to rely heavily on bountiful Khandesh and Burhanpur. This brought Burhanpur under the Mughal crosshairs. In 1601, Emperor Akbar conquered Khandesh. Soon, huge Mughal armies began pouring into the Deccan from this frontier capital.  As an oasis of security in war-torn Deccan, Burhanpur rose in prominence.

Burhanpur became the seat of Prince Daniyal, Akbar’s youngest son. When his elder brother Prince Salim rebelled, Daniyal rose in favor. However, Daniyal was an alcoholic. A hunting lodge named “Ahukhana” (Deer Park) was built just outside Burhanpur so that he could wantonly indulge in alcohol. In 1605 Daniyal drank himself to death. Soon, Akbar also died, and Salim was crowned Emperor Jehangir. Daniyal would not be the last prince to die in Burhanpur. Prince Khurram was the third son of Jehangir. In 1617 he was appointed Governor in Burhanpur, where he murdered his eldest brother, the fallen Crown Prince Khusrau. When Khurram himself rebelled, Burhanpur was given to his elder brother Prince Parvez, However, Parvez was an alcoholic and drank himself to an early grave. Thus, Khurram could ascend the throne as Shah Jahan in 1627 – after more kinslaying.

In 1630, a senior nobleman’s rebellion caused a ripple of instability and Shah Jahan moved the imperial court from Agra to Burhanpur. The Emperor himself was now a resident of Burhanpur. The Mughal court and forces, numbering lakhs, came with him. However, this could not have happened at a worse time – a great famine hit the Deccan. This famine, caused by successive crop failures in the region, lasted two years. Millions perished. Burhanpur being the de-facto imperial capital, and housing a huge host, made things worse as scarce food was hoarded and diverted to Burhanpur.

Shah Jahan tried to help, but the famine was too widespread and devastating. Regardless, Shah Jahan’s glittering court continued in splendor in the 7-storeyed Shahi Qila in Burhanpur. Mumtaz Mahal took over Daniyal’s Ahukhana and the Shahi Hammam, where she daily dipped in three perfumed ponds after bath. The Emperor constructed numerous imperial buildings in the city. The rebellion was also suppressed. Burhanpur saw even more Mughal drama when Shah Jahan apparently fell for a courtesan named Gulara Begum (Unsubstantiated accounts say that she was drowned by Shah Jahan’s father-in-law as she awaited her paramour in a river-boat). Mumtaz Mahal died during childbirth in Burhanpur in 1631, shattering Shah Jahan.

Shah Jahan would decamp in 1632, but the city retained its stature. More drama would unfold in 1636 when Shah Jahan’s dour young son Aurangzeb visited Burhanpur. There he apparently fell deeply in love with a courtesan named Hirabai. The prince wantonly indulged in music and frivolity with this courtesan. However, Hirabai died suddenly, and the grieving Aurangzeb relapsed to his former self.

Burhanpur’s importance dipped as the Mughal center of gravity in the Deccan progressed southwards. However, it was the Mughal collapse following Aurangzeb’s death that caused Burhanpur to fall. Between 1707 and 1818, Burhanpur was tossed between the Marathas, Mughals, Hyderabad, the British and local strongmen, and the great frontier capital was relegated to the sidelines.

Burhanpur is near-forgotten now, but things would have been very different if Shah Jahan’s original wish was executed. He wanted his beloved to be interned in Burhanpur in a marvelous tomb. However, investigations showed that the soil of the Tapti riverbank would not support the planned edifice’s weight. The narrow river would not capture the tomb’s full reflection. Moreover, it would be impossible to transport the marble from Rajasthan to Burhanpur. The emperor embalmed Mumtaz Mahal in the Ahukhana for six months. When initial preparations were done at a designated site in Agra, Mumtaz Mahal’s remains were transported there in a golden casket. The rest is history.

PS: This is my article in DNA published on July 21, 2019. Here’s the link to the original article.