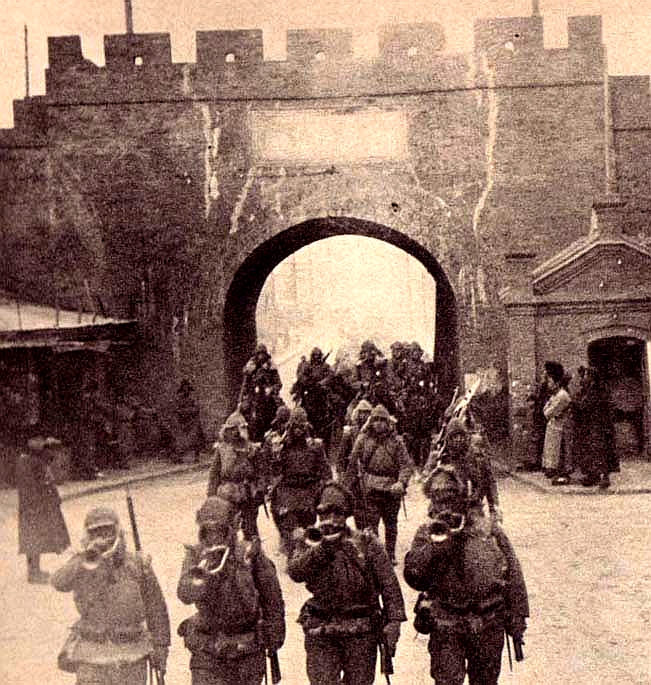 The Japanese invasion of Manchuria in 1931 was a globally condemned crime, ultimately leading to horrific Japanese domination of China. The naked aggression went unchallenged due to the ineffective League of Nations, Imperial Japan’s power and the seemingly unstoppable march of fascist ultra-nationalism worldwide. This invasion was made possible by a marriage of ultranationalism and crime in Japan. In their ascent to power the Japanese far-right co-opted the lower-class criminal and fringe groups of Japan. The latter were utilized by the ultranationalists for illegal financing, destroying their enemies and herding the society to the far-right. Decades of spirited propaganda and social transformation (on the lines of social conservatism or expansionism, or a mixture of both) stifled moderate voices in Japan. Even Prime Ministers, generals and ministers who opposed this were assassinated. Soon Japan became a far-right, expansionist nation. On their part the fringe and criminal groups used their new alliance to rise in stature from their humble origins. These groups would soon evolve into the Yakuza. Japanese victory in the Russo-Japanese War of 1905 further emboldened the far-right and reinforced notions of racial superiority. Japan now possessed Chinese lands formerly annexed by Russia and planned to conquer even more lands in Asia. The Chinese were not blameless in their misfortunes either. Frontline leaders, political factions, secret societies and criminal groups were once allied with the Japanese: The Qing Dynasty which ruled China till 1911 was a mutual foe. In the wake of the liberation struggle, many Chinese ended up colluding with the Japanese in terrorism, gambling, narcotics, and human trafficking. Once the Qing monarchy was deposed and Republican China formed the secret societies and criminal groups needed a reason to exist – and knew no trade except crime. With long-term plans for conquest in mind, the Japanese adopted these groups.

The pretext for the 1931 invasion was engineered by General Kenji Doihara. Doihara was a rising star in the Japanese army, rumored to be linked to ultranationalists and criminal groups. As the garrison commander in occupied Chinese territories he engineered events and military actions, against the orders of the Japanese Prime Minister (who would soon be assassinated by naval cadets), and formed the Manchurian puppet state christened Manchukuo. Chinese factions such as the Kuomintang and the Communists were defeated or were powerless to intervene. The deposed “Last Emperor” was reinstated in Manchukuo as a cover of legitimacy. Doihara soon launched a massive criminal enterprise that aimed at sapping Chinese strength and funding the imperial domination. In this, Doihara was aided by the ultranationalists, their criminal allies and Naoki Hoshino, a senior bureaucrat from the finance ministry. Large areas were used for opium cultivation and the Manchukuo economy became based on narcotics. Intrigue, terrorism, smuggling and human-trafficking also became staple features. In a short period, Hoshnio’s and Doihara’s expertise made Japan’s Manchukuo the leading producer of opium, heroin, and morphine. Narcotics were pumped into China through artificially depressed prices, tainted medicines and placebos, thousands of brothels and front organizations – and notable by drug-laced cigarettes manufactured by the Mitsui Group. The damage was heavy: Japanese invaders became self-sufficient, rising narcotics consumption enfeebled millions, and major Chinese cities became havens of vice. Desperate Chinese were forced to choose criminal life due to the money and escape it provided. Even Chinese resistance leadership was not immune and numerous officers from various factions were seduced. All this was not possible without the active support of the Chinese organized crime syndicates which allied with the Japanese for an easy buck.

Doihara and Hoshino would rise up the ranks, fueled by their successes. Doihara was instrumental in the Japanese entry into the World War-II and led major war endeavors. The war began well and Japan conquered large territories, but by late 1944 Japan was in full retreat. Manchukuo was however largely spared of American and British wrath: Allied attacks were focused on the Japanese islands and forces in South East Asia and the Pacific. In August 1945 Manchukuo fell before the Soviets who suddenly declared war on Japan after four years of professed friendship. The Soviets promptly gave Manchuria to their Chinese communist allies who quickly established control despite the efforts of the Kuomintang. Following the Japanese surrender General Doihara was hanged and Hoshino imprisoned by the war crimes tribunal, but key figures of the Manchukuo enterprise switched loyalties or escaped to safe havens along with their wealth. It would take great effort for the Chinese regime to dismantle the remnant and eradicate the bane of narcotics from Chinese society.

PS: This is the original version of my article in Daily News & Analysis (DNA), published on July 30, 2017. Here is the link to the published article.