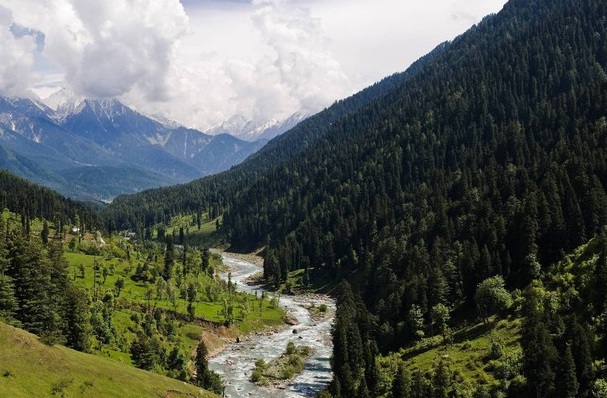 Kashmir had been coveted by countless powers throughout history. The strategic location, the breathtaking beauty of the land, and its resources had immense allure. As a result, the region has seen much socio-political churn through claims and counterclaims, and war and bloodshed. Arguably, Kashmir’s bloodiest phase was the Afghan occupation. This is the story of Raja Sukh Jiwan Mal, who arrived as an invader, adopted Kashmir as his land and became its de facto ruler. For eight years, he protected Kashmir from the Afghans by closely allying and empathizing with Kashmiri leadership. If not for sheer misfortune and chance, and Afghan wiliness, which led to his downfall, the history of Kashmir could have been very different. This period has been covered by historians and authors such as P.N.K Bamzai and Lft. Gen. K.K. Nanda.

In 1751 C.E., the disintegrating Mughal empire witnessed Afghan Emperor Ahmad Shah Durrani, a.k.a Abdali, thundering towards Delhi. The Mughal emperor quickly bought peace by ceding Punjab and Multan. Meanwhile, the Sikhs were defiantly carving out zones of influence just north of Delhi. Kashmir was also in turmoil. The Mughal governor, a vicious man, had earned the enmity of all Kashmir. In 1753, some Kashmiri leaders met Abdali in Lahore and requested his aid. The ambitious Abdali gladly sent his army into Kashmir. At Shopian the Kashmiri troops defected; the Afghan standard soon fluttered on Akbar’s Fort near Srinagar. The Kashmiris’ joy at the end of Delhi’s rule quickly turned to horror. Abdali unleashed his troops to loot Kashmir; their pillaging and cruelty turned Kashmir into a hellhole. Kashmir was given to an Afghan Governor, who was aided by a senior officer named Sukh Jiwan Mal.

Sukh Jiwan Mal was a Punjabi Khatri soldier in Abdali’s service. This talented officer had quickly risen in Abdali’s military hierarchy. As Afghan tyranny intensified, he was approached by a Kashmiri leader named Abul Hassan Bandey. He urged Sukh Jiwan to deliver Kashmir from Afghan tyranny. It is unclear if it was ambition or genuine concern which turned Sukh Jiwan. He captured power in a coup, claiming the support of all Kashmir. Abdali, fighting insurrection elsewhere, realized that the usurper had the populace behind him. Biding for time he “appointed” Sukh Jiwan Mal as his Viceroy. Later, unable to dislodge Sukh Jiwan Mal through conspiracies, Abdali invaded Kashmir. The heavily outnumbered Kashmiris managed to rout the Afghan invaders. Sukh Jiwan Mal now took the title “Raja” after nominally declaring fealty to the Mughals. Abdali was beset with other problems and decided to wait.

The Raja made Bandey his Prime Minister. The duo revamped state administration, raised finances, and built a strong army. Sukh Jiwan Mal’s qualities (save his rather gullible nature), state administration, and diplomacy with various factions healed Kashmir. His secular outlook and empathy for Kashmiris made him quite popular. However, misfortune struck when a terrible famine hit. Additionally, the main arsenal was destroyed in a major conflagration, severely diminishing Kashmir’s strength. As Kashmir weakened, the wily Abdali recruited an influential Kashmiri noble. This agent wormed his way into the inner councils and made the Raja suspicious of Bandey. Sukh Jiwan Mal believed trumped up charges against Bandey and had the latter stripped of power. Many were shocked by this and state administration weakened. However, the Raja realized his mistake and Bandey was reinstated. But Bandey apparently never forgave the Raja.

The Raja made another mistake: in 1758 he tried to conquer Sialkot in Punjab. This campaign ended in defeat, further eroding his power. Revolts flared up and the hill tribes began to raid the kingdom. Now Bandey broke his bonds of fealty and left. Later, trapped by the Raja’s men in Poonch, Abul Hassan Bandey killed himself. Bandey’s suicide alienated many and the administration unraveled. A Kashmiri official named Mahananda Dhar used this opportunity to ascend the ranks. Under his influence, Raja Sukh Jiwan Mal apparently began a policy of persecution. He also invited Hindus from outside to settle in Kashmir to increase his power. However, many such “immigrants” turned out to be brigands; they pillaged Kashmir and decamped. The Raja’s rule limped on, but his position became quite precarious.

By mid-1762 Abdali had triumphed over all foes – including the Marathas (in Panipat) and the Sikhs (in the horrific “Wadda Ghalughara”). He now sent his army into Kashmir. The Raja attacked this invasion force near Badgam. However, nearly the entire army suddenly switched sides. The Raja was surrounded and captured. The Afghans blinded him and brought him to Lahore. There, in Abdali’s presence, Raja Sukh Jiwan Mal was trampled to death by an elephant – the punishment for high treason.  The end of Raja Sukh Jiwan Mal’s reign ushered six decades of Afghan dominance, an era of terrible oppression and bloodshed. This ended in 1819 at the hands of Maharaja Ranjit Singh.

PS: This is my article in DNA published on September 1, 2019. Here’s the link to the original article.