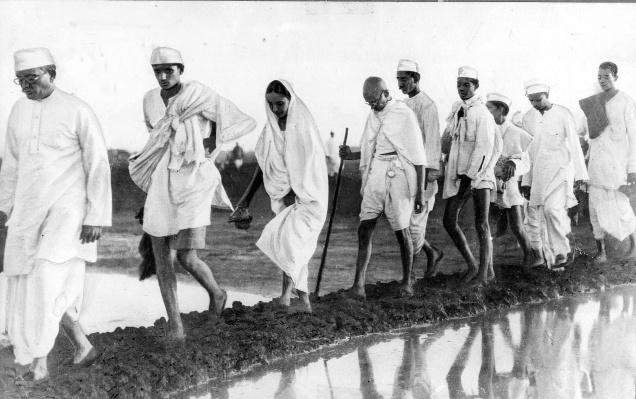 Perhaps the signature event of Mahatma Gandhi’s agitations is the 1930 Salt Satyagraha; notifying the Viceroy that he will break the law by walking to the salt farms, picking up salt and inspiring millions to similarly defy the Empire’s salt regime. Besides the Empire coldly planting its flag on a very essential good, salt in colonial India had a dark history, indicative of the way India was squeezed dry. The genius of Gandhiji was in making statements that resonated with the core of Indian suffering – and even the most wretched of Indians would understand the cause of salt

Historically India’s major salt producing regions were Orissa, Gujarat, and Punjab. High quality sea salt made in Orissa by the Malangi castes was preferred by most and there was a major inland trade. Salt taxes in India were always low but the volume of trade still made profits possible. Before their rise, even the East India Company traded heavily in Orissa salt for munitions manufacturing. Coinciding with her rise after Plassey, Britain had increased commercial salt production and needed foreign markets. However, they could not compete with Orissa salt in price and quality. When the Company offered to buy all the salt made in Orissa the Marathas declined as they understood that the British would slowly eliminate it from the markets. In retaliation, the Company banned Orissa salt in their territories. The Bengal-Orissa border was porous and a salt-smuggling operation grew overnight: British salt continued to lag behind. In 1803 the Company annexed Orissa in the Maratha War and private production, stocking and trade of salt was banned.

Malangis originally worked under Zamindars who made good profit in the salt trade. Post-conquest, the British assumed leadership and advanced money to the Malangis against future salt production. However, very low wages and the production targets made repayment difficult, driving Malangis into bonded labor. Zamindars and Malangis soon indulged in contraband salt and the British responded mercilessly. In the 1817 Paik rebellion the Malangis also rebelled. The uprising failed but the underground trade continued. To end smuggling, the Company established customs checkpoints throughout their borders. Soon, a “Customs Line” grew around Bengal and Bihar. Corruption and smuggling persisted and the Company constructed a tall thorn hedge on the border to deter smuggling. The hedge was soon upgraded into a thick artificial forest, virtually impenetrable except for guarded gateways. This physical Inland Customs Line soon grew to 4000 kilometers, extending from the Himalayas to Orissa. This wall dedicated to the enforcement of the salt regime and preventing free movement of native traders soon employed over 12,000 personnel. It was abandoned in the 1880s only after the British established total control of trade in the subcontinent.

In 1804 English salt merchants still feared competition and lobbied Parliament to undermine Indian salt. The British slashed local production, ruling that Orissa salt was of “inferior quality”. They also periodically lowered wages. The price competitiveness and quality of British salt kept growing and in 1864, duties on domestic and imported salt were equalized. The local salt industry could not compete anymore. The government instructed their officials to end salt manufacture in Orissa and thousands became destitute. After the famine of 1866 the Malangis left their homelands seeking menial jobs in the cities. However, salt industry in Gujarat grew due to access to capital and the alignment of native and British interests. Voices rose periodically in support of Orissa and salt workers, and against the heavy salt tax instituted in 1878. In 1927 this tax was doubled amidst great uproar. The British refused to lower salt tax as this was the only revenue they effectively collected from the poor: after all everyone needed salt! By 1929 the public mood had worsened; it was at this juncture that Gandhiji adopted the cause into the National Movement.

Though the Satyagraha took place in Gujarat, Orissa enthusiastically joined the Satyagraha. This issue resonated all over India and the British executed severe reprisals – including massacring seventy protesters in Peshawar. The Gandhi-Irwin pact that followed was a mutual compromise: the salt tax continued but coastal communities could make salt for their own consumption. The British compromise also showed the power of mass agitations and invigorated the freedom movement. However, despite strenuous efforts the weight of colonial history prevented Orissa from ever being the leading salt producer of India again.

PS: This is the original version of my article in Daily News & Analysis (DNA), published on June 25, 2017. Here is the link to the published article.