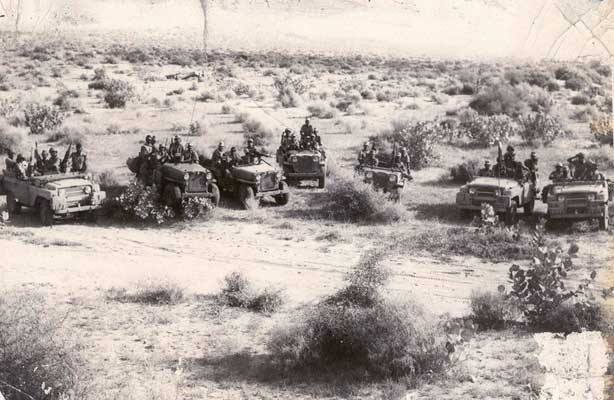 Today is the 47th anniversary of the Liberation of Bangladesh. The surrender of the entire Pakistani garrison in East Bengal and the gains in the Western Sector made India the clear victor of the war of 1971. It was one of our finest hours: Indians came together, overcoming multiple crises, fears,boundaries, and institutional inertia to achieve a great feat. There are many stories surrounding this victory, one of the more interesting stories is that of a small band of soldiers of the 10 Para (Commando) battalion in the Rajasthan sector.

The Pakistanis had surprised us in the Rajasthan sector in the 1965 War. Given the comparative lack of mechanization of both Indian and Pakistani armies, it was hitherto believed that both would refrain from major campaigns in the sandy Thar Desert. The vast desert border was manned by thinly spread Indian Army and State Armed Police units in isolated posts. On the other side, the Pakistani army and the Pakistan Rangers precariously manned their positions.However, the Pakistan Army approached the Hurs, a Sufi sect with thousands of adherents in Sindh. The Hurs had once unleashed a bloody insurgency against the British, which resulted in heavy reprisals – including the hanging of the Hurs’ leader, the “Pir Pagara”. The Hurs had extensive knowledge of the desert and were known to be fanatical fighters. The generals successfully appealed to the reigning Pir Pagara to field this militia. The Hurs were initially used to plug gaps in defense, but the local commanders soon realized that the Hurs would be better suited for cross-border raiding. Soon, a “Desert Force” of Hurs (commanded by a handful of professional soldiers) began to raid deep into Indian territory.

Several Indian posts fell: even significant posts such as Ghotaru Fort were captured by the Desert Force. Indian responses were rather slow and unsuccessful. This was due to the terrain, poor lines of communications, lack of adequate force and the speed of the enemy raids. The Pakistanis retained control of several points along the Rajasthan border when the war ended. Pakistan utilized this fact to her advantage in her negotiations at the ensuing Tashkent Summit. India apparently learned the lesson: within months, the capable Border Security Force was created. The 10 Para (Commando)battalion, tasked with desert operations, was raised in Gwalior in 1967. The conventional forces in Rajasthan were also strengthened.

The reckoning came when the Indo-Pak War erupted on December 3, 1971. A division of the Indian Army was directed towards Umarkot, a city en route to the metropolis of Hyderabad, Sindh. A band of commandos from the 10 Para (Commando) was designated the advance element and tasked with raiding deep inside Pakistani territory to eliminate key enemy positions. These commandos had trained intensively for such operations since July. The commando unit was led by Lt. Col. Sawai Bhawani Singh, a special forces veteran and the Prince of Jaipur. The unit also had Khoja Rajputs who knew the region well. The force would enter enemy territory without any air or armor support, in specially fitted Jeeps and Jongas, armed with only light weapons. This model of long-distance raids was created by Sir David Stirling, founder of the British Special Air Service (SAS), during the North African campaign of the Second World War. Indians had also fought in this campaign and were aware of the utility of such a force – even though the sandy Thar Desert was far worse than the North African desert.

The raids commenced on December 4; the jeeps raced 80 km into Pakistan and destroyed the Ranger base in the town of Chachro. Indian army units soon occupied Chachro in the wake of this raid. Next, the commandos launched daylight raids to capture Virawah and Nagarparkar. Later, Islamkot and Lunio also fell. During these operations, the speed and ferocity of the attacks forced enemies to panic and flee despite having superiority in numbers and position. The militia groups tasked with defending this region also did not fare any better. Logistical difficulties and terrain – and the short duration of the war – saw the Sindh campaign halt just short of Umarkot. However,by the end of the war about 13,000 sq. km of Sindh was in Indian hands.

The Sindh campaign was made much smoother by the10 Para’s raids. This was an incredible feat, highlighted by the fact that the commandos suffered no fatalities in these risky missions. The raiders had done all that was asked of them, and more. The unit was bestowed a Battle Honor – “Chachro1971” and received 10 gallantry awards: Sawai Bhawani Singh received the Mahavir Chakra. He went on to have a distinguished career in the armed forces, and as a diplomat. The 10 Para continues to be one of the premier special forces of the world.

PS: This is my article in DNA, published on December 16, 2018. Here’s the link to the original article.