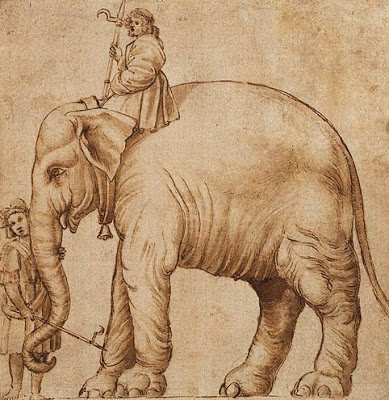 The Age of Discovery (15th – 17th century) had spread accounts of exotic people, places and animals of the East and the New World in Europe. Many European kings and nobles began to keep menageries, i.e. collection of exotic lifeforms, of such specimens. The elite kept such collections as a symbol of their power: it was no mean feat to acquire, transport and maintain such collections far away from natural habitats. Around 1511 C.E., King Manuel I of Portugal decided to befriend the pope, in the light of troubling developments in the spice trade. In those times, having the Holy Father of the Catholic Church on your side gave a definite edge given the frequent papal interventions and arbitration in politics. Orders were dispatched to Portuguese subjects currently establishing a foothold in India: they must procure exotic beasts and birds for the Holy Father – an elephant would be an excellent addition. After all, since Alexander’s time Europeans were mighty impressed with the Indian elephant.

In 1512, the Portuguese in Cochin bought an albino baby male elephant and trained it to perform tricks. The elephant was sent to Lisbon, accompanied by exotic birds and animals also. In 1513 the new Pope ascended. The 38 year-old Leo X, hailing from the great Medici family, was comparatively liberal, curious and easygoing (if somewhat extravagant and eccentric). Like most noblemen, Pope Leo X was fond of novelties and animals; he would appreciate Manuel’s menagerie. The Portuguese delegates and the menagerie marched to Rome on February 1514. The extravagant procession of the wildlife and wealth of India dazzled everyone; multitudes thronged to glimpse this great caravan. The elephant carried on its back a castle-shaped silver platform. The procession entered the Holy See and Hanno kneeled before the Pope and offered gifts with his trunk. The gesture was brilliant – Manuel had triumphed in the Orient and brought the East’s wealth and wonders as tribute for the pope. King Manuel thus gained the friendship of the immensely pleased Pope.

The Portuguese called the elephant Annone, perhaps based ‘Aana’, on the Malayalam term for elephant. This name changed to Hanno soon.  Leo X became instantly attached to Hanno and brought it along for all events. He built a new elephant stable right next to his palace and spared no expense in making Hanno’s life comfortable. In his reign, Leo X faced many troubles: poor health, poor finances, heretics, the French and the Turks. Worst of all was the rebellion brewing in the Church. Many theologists, priests, and lay followers were decrying the rising corruption in the Church. The decadent lifestyles, ugly politics, and rampant sale of “Indulgences” (Papal statements which absolved anyone of sins) created much anger. Amidst all these woes the pope carried on with his elephant. Many contemporary sources were not happy with this – they felt that the Pope spent too much time with Hanno while Christendom suffered. Hanno was however a hit with the commoners, and thousands traveled to Rome to view his antics.

In May 1516, Bonaventura, a fanatical preacher, and thousands of his followers entered Rome. Calling himself the Angelic Pope (a prophesized leader crowned by angels to lead Christendom during end-times) he excommunicated Pope Leo and called for the Church’s overthrow. Bonaventure cursed the regime: he announced that the pope, five cardinals and the pope’s elephant would die by September. The pope, a superstitious man, became very fearful. However, he mustered enough resolve to imprison Bonaventura and disperse the mob. However, the hitherto healthy elephant suddenly became very ill. The pope was aghast; he was convinced this was a portent of his own death as per Bonaventura’s curse. Leo X spared no cost for the treatment (which included purgatives heavily laced with gold) and spent all his time with the dying elephant. However, Hanno died, aged seven, on June 1516. The Pope and the commoners were grief stricken. Raphael, the great artist, was commissioned to create a life-sized monument. Other monuments were built for the elephant across Rome. The pope himself penned Hanno’s epitaph. Hanno’s remains, sans his tusks, lie somewhere in the Vatican.

This was not the first, nor the last time, that elephants (or other exotic beasts) were kept by European rulers. Perhaps this is not the saddest episode either. Yet, the episode of Pope Leo X and Hanno had a curious impact. Caustic reports and satires of the episode, including a hilarious “Last Will and Testament of Hanno the Elephant”, caused much uproar in Italy. The Pope’s obsession with Hanno was heavily criticized in the writings of Protestant reformers such as Martin Luther. Such critics used this episode as representative of the decay of the institution of the pope, helping the rebellion snowball. In a way, Hanno the elephant played a small part in the Protestant schism in 1517.

PS: This is my article in DNA, published on October 14, 2018. Here’s the link to the original article.