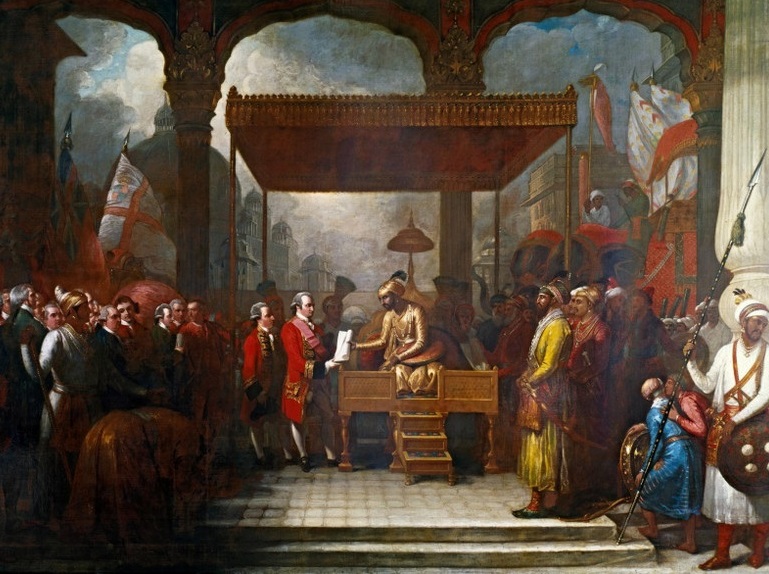 This is the second part of a three-part series on the unfortunate Mughal Emperor Shah Alam II.

It was 1760 and Prince Ali Gauhar was now Emperor Shah Alam II, but he was not entirely out of danger. His Rohila Afghan feudatories of the Upper Doab and Rohilkhand had a fierce and unruly streak. They had also become too powerful and close to the Afghan Emperor Abdali recently. Awadh, where he remained exiled, was ruled by his feudatory Nawab Shuja. However, this Nawab was a Shia. He was also powerful, practical, and was close to many Hindu powers. The East India Company (EIC) now dominated the East after the Battle of Plassey; early attempts of reconquest had failed. Above all, his father’s killer, Imad-ul-Mulk, and the Marathas held Delhi. Also, an enormous Maratha host had coalesced in the North, bent on conquest. Nevertheless, he had plans to reclaim Mughal glory.

The Islamist clergy was worried by the rapid rise of the Marathas. One of the leading clerics, Shah Waliulllah, invited Abdali to ally with Muslim states and “save India from the Kufr”. Abdali duly launched an invasion, sweeping away the Marathas from the North West Frontier and Punjab. The Rohilas and Mughals saw their chance and recaptured Delhi. Chasing away Imad-ul-Mulk and deposing his Puppet-Emperor, they joined Abdali. In the ensuing Third Battle of Panipat (January 1761) the Marathas were crushed – they would not return north for another decade. However, being wary of the ascendant Rohilas, Shah Alam did not return to Delhi. Moreover, he wished to focus on the eastern provinces of Bengal and Bihar, now under British control. The Rohila chief Najib ad-Dawlah held Delhi, while Shah Alam attempted to recapture the East from his base in Awadh. However, he was no match for the British and lost the decisive Battle of Buxar (1764). He was forced to grant unbridled rights to the EIC. This marked the true beginning of British paramountcy in India. The dejected Emperor spent the next five years as the EIC’s “guest” in Allahabad.

Najib ad-Dawlah died in 1770 after shepherding the empire through great regional convulsions and holding the Marathas at bay. The Rohila chief’s death led to the ascent of his son, the scheming and unpopular Zabita Khan. He made secret overtures to the Sikhs to compensate for his lack of support within the empire. About this time, the resurgent Marathas returned to the north. Despite crippling factional politics, the Marathas under the great general Mahadji Shinde ousted the Rohilas from Delhi in 1772. The Emperor now reached out to Shinde – he would bestow imperial favor if he would escort him safely to Delhi. Jagirs and rich tributes would also be awarded to the Maratha leaders. Thus, after 13 years of exile Shah Alam II returned to Delhi, albeit under Maratha aegis. He was not yet the master of his fate, but at least he was back.

Shah Alam immediately turned against Zabita Khan. A Maratha-Mughal expedition into Zabita Khan’s lands in the Upper Doab was launched. Zabita Khan was defeated and lost much territory. Other Rohila chiefs were suppressed with British aid in the First Rohila War (1773-1774). A seething Zabita Khan soon allied with the Sikh Sardars, but a subsequent Mughal expedition destroyed Zabita Khan’s rump kingdom in 1777. Zabita Khan fled with his Sikh allies, but his heir, the very young Ghulam Qadir was captured. The Rohila chief’s womenfolk were dishonored and male relatives massacred. Ghulam Qadir was spared by a high-ranking eunuch official and was made Shah Alam’s page.

Various accounts attest that the Emperor’s character began deteriorating around this time. A lifetime of fear, hardship and losses had taken its toll – his increasing opium addiction and debauchery was also to blame. Shah Alam began to mistreat noble captives and his kin the Salatin Quarters – where he himself suffered during his youth! One day he claimed that the handsome Ghulam Qadir was seducing the noblewomen and plotting his assassination; the teen was castrated and made a harem eunuch. Zabita Khan now beseeched the new regent Najaf Khan to free his family in return for ransom and his total submission. The regent granted this plea and Zabita Khan submitted for good. Ghulam Qadir’s ordeal would however come back to haunt the emperor in 1788, and those catastrophic events would finally end Mughal power and prestige.

For now, the Mughals had recouped some lost strength. Even with the emperor’s deterioration and endless court intrigues it briefly seemed that under Najaf Khan the Mughals would rise again. However, the Sikhs had grown very powerful and checked Mughal expansion. In a sudden invasion following Najaf Khan’s death in 1782, the Sikhs even sacked Delhi. Unable to find good men to serve and protect the empire, the emperor requested his old ally Mahadji Shinde to become the empire’s regent in 1784.

PS: This is my article in DNA published on May 19, 2019. Here’s the link to the original article.