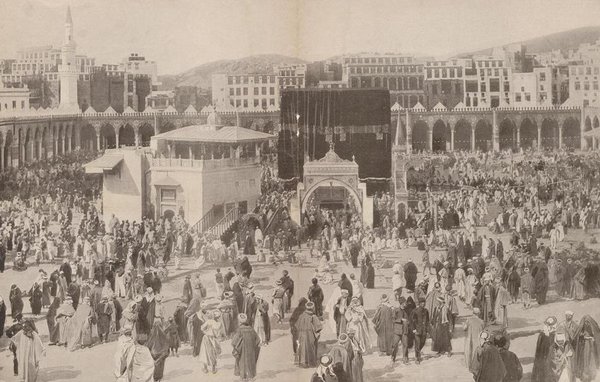 In the second half of the 19th century, the Hajj pilgrimage was characterized as a “source of twin infections” by the British, French and Dutch empires: the cholera pandemics which killed millions, and fundamentalist Islamism stoked in the Hajj lands. By the early 1800s, imperial expansion had brought millions of Muslims under foreign rule and the responsibility of the pilgrimage now fell upon the new non-Muslim masters. Steam power made the hajj accessible to the lower strata of Muslim society and the number of pilgrims increased. The acceptance of the Kufr rulers was heavily based on how Islamic worship and sensitivities were treated. To ward off rebellion and mass deaths through pandemics, imperial machinations regarding the Hajj continued till the accession of Sultan ibn Saud as the Emir of the Hajj lands.

It was clear to imperial authorities that trade, mass gatherings and migrations were responsible for the sudden cholera outbreaks. It was therefore imperative to police the Hajj, where people from many nations congregated. Most pandemics were found to have originated in British India and consequently there was much pressure on the Raj. The second threat, the “infection” of anti-colonial radicalism against western powers, was perceived to be even more dangerous. The Hejaz, the strip of land linking Mecca and Medina and bordering the Red Sea, was an area where Islamic exiles and malcontents always gravitated to. Also, several Islamic sects were based here and their adherents from around the world exchanged ideas and experiences here. Fundamentalist Wahhabism gained had been gaining power steadily in the Arabian Peninsula and was perceived to be a threat by all empires. Some of the highlights of the Wahhabi rise were a failed rebellion against the Ottomans which led to the beheading of the first Saud Emir, and the sack of Karbala, a major spiritual centre for Shia Islam. The Hejaz was under Ottoman control and relationship between Ottoman Turkey and the west had deteriorated since the Crimean War bonhomie. The vastly superior western navies however plied the Red Sea and the Turks could not stop this. Nevertheless, the growing pan-Islamist movements under the aegis of the new Ottoman Emperor Abd Al-Hamid II was a major threat.

The French wildly oscillated in their Hajj policy – ranging from outright ban to subsidy extravaganzas. The British and Dutch were more even-tempered and relied on diplomacy, track-II diplomacy, and secret agents. Elements of the Muslim communities which feared the rise of radicalism actively aided the western empires here. The western quarantine measures were universally despised though. Crude methods of disease containment and disposal of bodies caused much suffering and death at the home ports and the Red Sea ports. The black legends of “western medical conspiracies” grew, if not originated, in this period. The Ottoman administrators in the Hejaz also successfully deflected the blame towards the westerners. The colonial narratives and mindset also created racist bureaucracies which offended and hurt the pilgrims. The high-handedness in the name of pandemic prevention even led to occasional bursts of violence. To an extent this phenomenon was reduced when the British recruited Muslims into the Hajj bureaucracy and actively gathered the opinions of various communities and sects.

The cholera threat was subdued by science by the end of the 19th century, but the anti-colonial threat remained. The Ottomans had long dreamed of re-conquest by posturing their Emperor as the Khalifa of all Muslims, because he was custodian of the shrines of the Hejaz. In response, the British threw their lot with Abdulaziz Ibn Saud and his Wahhabi allies during World War-1. This Arab Revolt succeeded and control of the Hejaz passed to Ibn Saud, who quickly united various tribes and eliminated rival power centres – including his former ultra-radical Wahhabi allies called the Ikhwan. Soon, the discovery of oil and the new American alliance propelled Ibn Saud to great power and influence. The Saudi control over the Hajj played a major role in the independence of Algeria from the French: the Saudis recognized the rebels as the rightful representatives of all Algerians pilgrims and actively aided the rebellion. In a way, the nightmare of Hajj inspired anti-colonial radicalism leading to loss of empire had finally come true.

PS: This is the original version of my article in Daily News & Analysis (DNA), published on April 30, 2017. Here is the link to the original article.