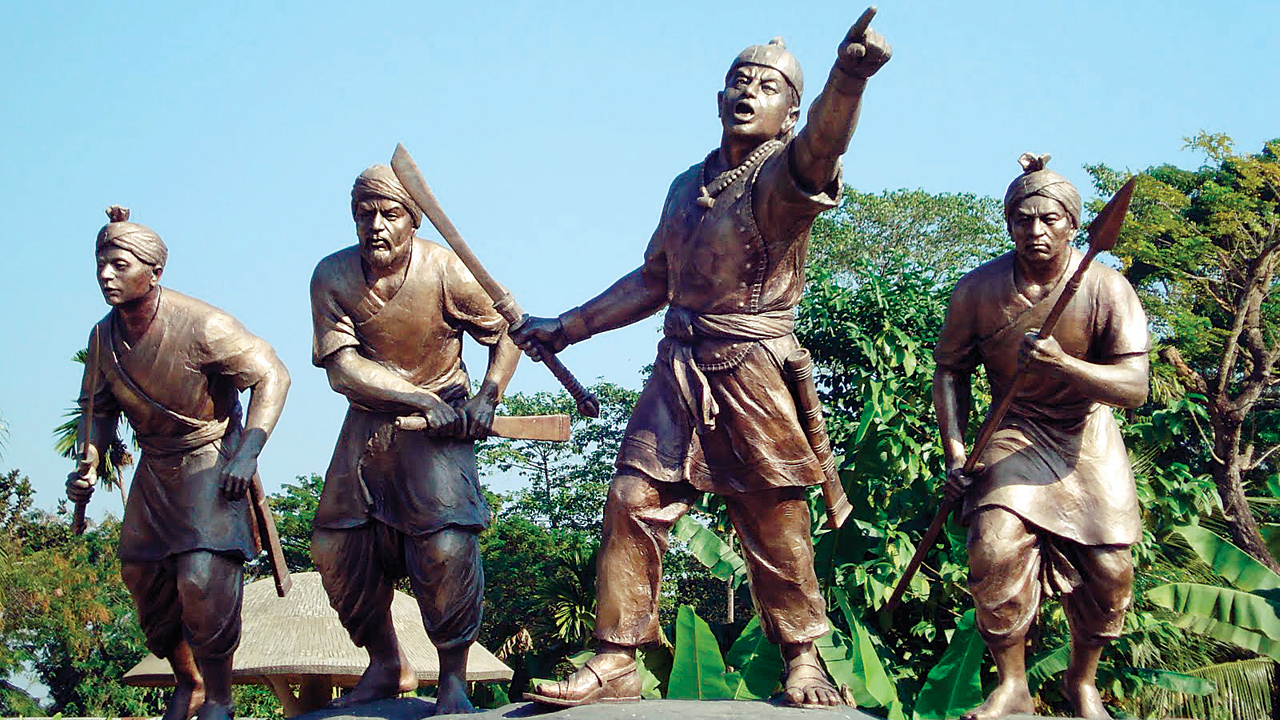 In 1822 C.E. Assam fell to the Burmese as a direct result of socio-religious conflict which unraveled the centuries-old Ahom state. Assam was rather unique in this respect – other Indian kingdoms were weakened by succession crises or petty squabbling with neighbors and became ripe for plucking by invaders. Just before the Burmese invaded and dealt the death blow, Assam was greatly weakened by a bitter thirty-six year-long civil war called the Moamoria Rebellion.

For centuries an Assamese neo-Vaishnavite movement was gaining popularity among major tribes, recent settlers, and lower-caste people. This monotheistic movement named Ekasarana Dharma, followed the teachings of Srimanta Sankardeva, a major figure of the 16th century Bhakti Movement. Ekasarana Dharma was based on decentralized socio-religious institutions called “Sattras” where practices radically different from mainstream Hinduism were followed. The movement instituted communal prayers in Assamese, and promised salvation to anyone who diligently recited the name of Krishna, the supreme God. Submission to the Guru leading the Sattra, tithe payment, strict rejection of idols and rituals, and everyday life centered around communal prayers were core practices. By the late 18th century, the movement swelled considerably and had branched out into multiple sub-sects. A sub-sect called Mayamara (later corrupted to Moamoria) became prominent due to their enthusiastic admission of tribals, fisher-folk and low-castes. The entry of the fierce and hardy tribes such as the Morans into their folds soon changed the very nature of the Moamorias.

The rising popularity of unorthodox Sattras like the Moamorias had siphoned off the power of orthodox Hindu groups and the powerful Shakti-worship sect which supported the Ahom kings. There was yet another reason to fear these Sattras: they provided refuge for those seeking to escape the “Paik” System that was the backbone of the Ahom state. In this corvée (state-run unpaid, forced labour) system, any able-bodied person who was not a Brahmin or a noble could be used for labour, services or conscripted into the army – without a choice on this matter. The flow of thousands of subjects into the mushrooming Sattras (away from the clutches of the Paik system), and charismatic Sattra Gurus swaying many high-born people, would surely destroy the Ahom state. The mainstream sects and the Shakti order launched vehement theological attacks and encouraged pliant kings to curtail or destroy the heretic Sattras. Periodic campaigns were launched: many Satras were destroyed and leading priests and followers were killed. A few Sattras submitted; the other Sattras did not – or could not – retaliate on a large scale. However, rising dominance of the Morans and similar groups in the Moamoria Sattra would change this.

The rebellion finally erupted in 1769 C.E. when the Moamoria Guru and key Moran disciples were humiliated and flogged by royal officials. Years of religious repression had built up much anger – the flogging incident simply ignited the charged atmosphere. Shoddy treatment of tribals (who now dominated the Satra), caste oppression and the Paik system also contributed to the rage. The Moamorias, and others who sympathized with their cause, banded together and marched to Rangpur, the Ahom capital. They defeated the Ahom forces and imprisoned the King. An orgy of revenge followed: top officials and priests were executed and a puppet ruler was installed. The violence and the rebels’ inexperience in ruling a state led to this regime crumbling quickly. The Ahoms regrouped and chased the rebels into the mountains and jungles. The Moamorias lost their Guru and many leaders; the year-long military campaign also killed thousands. The subsequent guerilla war between 1770-1788 slowly sapped the strength of both parties. Guerrilla attacks and military campaigns occurred relentlessly. In 1788 a Moamoria campaign captured Rangpur once again. King Gaurinath Sinha fled and sought refuge in neighboring lands.

By 1792 the rebel dominion had grown and the King sought the aid of the East India Company, now the eminent power in India. Perhaps they could be able to defeat the heretic rebels. The British on their part were well aware of the Assam situation. They also realized the strategic importance of Assam, given the growing power of Burma. The company sent a crack force into Assam to restore Ahom rule. The Moamorias were no match for the British and soon retreated to their strongholds. Gaurinath Sinha was reinstated in 1794 and the British forces left – but the guerilla war resumed. In 1805 the tired belligerents agreed to a compromise. In return for peace the Ahoms formally ceded territory to the Moamorias where the latter established the near-independent state of Matak (“One Principle”). However, the damage was done. Gutted by the long civil war, the Ahom state could barely sustain itself. In 1817, the Burmese used a political crisis as an excuse to invade. The Burmese annexed Assam in five years, slaughtering Assamese regardless of faith, creed or caste. In 1826 the British became the new master of Assam following their victory in the First Anglo-Burmese War.

PS: This is my article in Daily News & Analysis (DNA), published on December 10, 2017. Here’s the link to the original article.