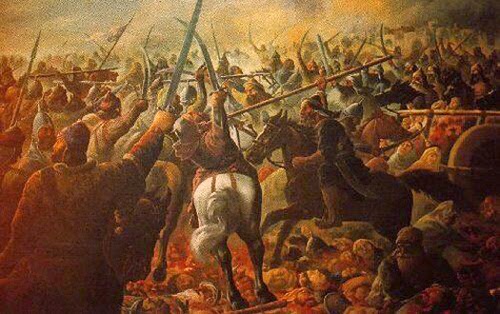 Armed ascetic orders were a major phenomenon in India till the mid-19th century, when they were destroyed, disbanded or resettled by the British. Trained in rigorous penance and military drill, and seeped in martial spirit – to the pointed of being chastised by saints such as Tulsidas and Kabir – these militarized orders were once significant powers. Even within the framework of Mughal supremacy and other states, these orders wielded much control over pilgrimage sites and temples. Contrary to conventional sadhus who renounced worldly life and immersed themselves in devotion and tapas, the sadhus of these military orders viewed ascetic lifestyle and training as a means to rise in worldly affairs. The decline of the Mughals led to rebellious governors or new kingdoms jostling for supremacy all over India. The chaos of the 18th century encouraged some orders to secure even more power. Many such orders became influential military entrepreneurs; one the more successful ones were the Naga Gosain Sadhus. This ascent of the Gosain order was partly due to their close association with the Nawabs of Awadh.

Awadh state comprised of prime lands in the Gangetic Plain, and once was the jewel in the Mughal crown. The ruling dynasty was Shiite but majority of the Awadhi populace was Hindu. Moreover, most of their Muslim subjects were Sunnis. The Nawabs understood the need for a balancing act given the demographics and the chaotic political scenario. From the 1740s the Nawabs cultivated friendship with the Gosain Sadhus and other such orders. The Gosain Sadhus led by their mahant Rajendragiri had grown to a sizeable fighting force by the 1740s, during the reign of Nawab Safdar Jung. They soon became his chief allies and Safdar Jang heaped his patronage on the order. The ascent – and importance – of the Gosains was due to charismatic warrior gurus such as Rajendragiri, Anupgiri (a.k.a. Himmat Bahadur), Umraogiri, etc, who attracted thousands into the order. Caste and ritual orthodoxy were not major concerns of the Gosains. Therefore, a large number of low-caste and destitute people also signed up for the heady mixture of sustenance, purpose and martial euphoria. The order was no flawless war-machine but it had thousands of men with nothing else in life other than to live and fight under the guidance of their Gurus. The training, the rigorous lifestyle and fanaticism made them more valuable than a peasant militia. The Naga Gosain ascetics fought naked, save for talismans and weapons, in berserker rage, unmindful of the elements. For the Nawab, a force of such ferocious heathens would be useful in any conflict with his Sunni civilians and neighboring Sunni Muslim states.

When the Marathas made their push northwards in 1760 C.E., the Afghan King Ahmed Shah Durrani (Abdali) was invited to invade India by Shah Waliullah, a leading fundamentalist cleric. The Afghan-origin Rohilkhand rulers and the Mughals, fearful of the Marathas, allied with Abdali. The proximity of these two states – and the swift Abdali invasion – forced Nawab Shuja-ud-Daula (the successor of Safdar Jung) to ally with Abdali after failed efforts to broker peace. In this largely Islamist alliance, the Gosain Sadhus fully supported the Nawab against their own co-religionists. They reportedly fielded over 10,000 men for battle. On the other hand, one of the most potent forces in the Maratha army was the Deccani Muslim musketeer infantry led Ibrahim Shah Gardi. The gory tale of the Third Battle of Panipat is well known; the Gosains fought well as per chroniclers. Before the battle, Abdali was actually incensed at the sight of thousands of naked heathens in his encampment. It took some adept maneuvering by Shuja-ud-Daula to avoid fights within the camp. After proving themselves in battle the Gosains gathered the bodies of the fallen Maratha leaders and cremated them according to Hindu rites. The Nawab reportedly had to pay a princely sum to Abdali so that his allies could perform these last rites.

The Gosains continued to aid Awadh – notably in the Battle of Buxar against the British in 1764. The British decisively won this watershed battle and the Gosains realized that the Awadh state was finished. As a roving force they offered services to various powers. In a twist of fate, the Gosains under Anupgiri became a major ally in the later Maratha campaigns. The Gosains also aided Bajirao and Mastani’s grandson Ali Bahadur (whose father had fallen in Panipat) carve out a Maratha vassal state in Banda. In this period Anupgiri himself rose to be the de-facto king of a swathe of Bundelkhand. During the 2nd Anglo-Maratha war when the Marathas started to retreat Anupgiri ceded Bundelkhand to the British. Following his death in 1804 his army split into separate bands. These bands either settled down or sought new masters. The growing British Raj soon clashed with the Gosains and other armed orders till the latter were eliminated, disbanded or severely curtailed.

PS: PS: This is my article in Daily News & Analysis (DNA), published on December 17, 2017. Here’s the link to the original article.