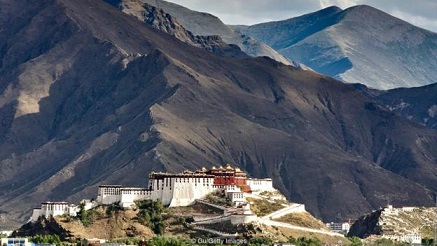 The “Great Game” was an Anglo-Russian conflict over the control of Tibet, East Turkestan, and Central Asia.  In the 19th century, this vast region was a patchwork of backward states and tribal confederacies. The Russians feared British inroads into this region from India. On the other hand, Britain feared Russia’s steady conquest of Central Asia. A cold war, peppered by minor confrontations, raged between the two empires from the 1830s to 1895. The Great Trigonometric Survey of India, a project to measure the entire Indian subcontinent with scientific precision, was also a part of the Great Game. Great feats of diplomacy, deceit, espionage and violence were accomplished in the Game – and Indian subjects also played an important part. Today we look at the “Pundits” who explored mysterious Tibet for the British Empire.

Tibet, the “roof of the world”, banned all foreigners in 1850 when the Great Game heated up. But Tibet was too important; it was the source of Asia’s great rivers. It also lay between the Raj, the weakening Chinese Empire and the Russian Empire. By 1862, multiple attempts by Englishmen to enter Tibet failed due to border brigands and vigilant Tibetan soldiers. The British now decided to utilize Indians from the border regions – after all they had been crossing the Tibet border for centuries! Buddhist pilgrims even traveled to towns and monasteries deep inside Tibet. British officers began to scout for talented (and loyal) Indian subjects from the borderlands. ‘Pundit’, which normally implies a high-caste man of learning, became the term for these recruited agents. The agents’ names were withheld from all government records till they retired; they were instead marked as “Pundit Number One”, “Pundit Number Two”, etc.

The Pundits learned to survey geographic features, estimate distances, determine altitude (by measuring the temperature of boiling water), and celestial navigation. They were trained to use code language and concealable parchments. The Pundits also received basic medical training. They were trained to walk two thousand paces to a mile to estimate distances. To keep count they used a modified Buddhist rosary, but instead of the usual 108 beads it had 100 beads – with every tenth bead being slightly larger. For every 100 steps, the 100th larger bead was removed. The Buddhist prayer wheel hid the parchments on which the records were made in code. Other ingenious instruments were also utilized for the Pundits’ covert activities. The first Pundit, a Punjabi named Abdul Hamid, was sent to survey the route to Yarkand in East Turkestan. The most famous Pundit, called “Chief Pundit” was Rai Bahadur Nain Singh Rawat, who hailed from present-day Uttarakhand. An astute student of tradecraft and scientific surveying, Nain Singh soon became the Empire’s greatest assets in Tibet. Nain Singh soon recruited his brother Kalian Singh and his cousin Mani Singh. More Pundits were recruited from other border regions of the British Raj.

Pundits disguised as pilgrims and holy men began to slip into Tibet successfully. They took detailed records of their journeys, often at night time to avoid detection. In their long missions, they measured terrain, and recorded resources and notable geographic features. The Pundits also analyzed Tibet’s people, economy and military strength. Nain Singh conducted multiple missions into Tibet, the last one being an epic journey from Leh to Guwahati via Tibet’s capital, Lhasa. His brother Kalian, cousin Mani and another cousin Kishen Singh recorded vital information of other regions. A Pundit named Kinthup from Sikkim discovered that the Tsangpo River in Tibet was actually a tributary of the Brahmaputra. Until then it was not known if the Tsang-Po flowed into China or into South East Asia. Mt. Kailas and the early courses of the Indus and the Sutlej rivers were also surveyed by the Pundits.

The Tibetan endeavor continued for decades. Some Pundits were caught and imprisoned or executed. However, the Pundits’ dogged efforts enabled them to map the approaches and key regions of Tibet with precision. This became very valuable when the British launched the infamous Younghusband expedition to Tibet in 1903. The Pundits were rewarded with titles and posts on retiring from covert work. However, imperialism, racism and reasons of security kept their names out the limelight for years. Nain Singh himself was publicly feted years after his retirement.

While it is true that their missions were undertaken to further British aims, the Pundits deserve to be commended for their accomplishments. In fact, in 2004 the Government honored Nain Singh for his survey of the Himalayan region by issuing a stamp featuring him. For years Tibet was represented as a blank zone in all maps, the Pundits changed that. In a time without satellites or aircraft, these intrepid men provided collected vital information, against heavy odds.  This enabled the opening up of Tibet and peeled off layers of mystery surrounding that land.

PS: This is my article in DNA published on February, 2019. Here’s the link to the original article.