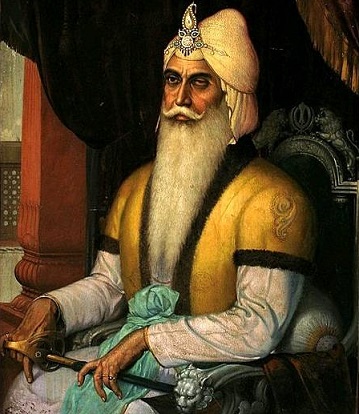 A few weeks ago, the Indian Air Force’s Balakot airstrike using French-built Mirage-2000s bought India and Pakistan to the brink of war, and perhaps changed the regional dynamics forever. Balakot has a history which has been a subject of much interest in the past few days: it was the site of the end of Syed Ahmad Barelvi’s Jihad at the hands of the Sikh Empire. Today we look at this history and another curious fact – this was not the first time that French weaponry has been wielded against Islamist fanatics in this region.

Maharaja Ranjit Singh (r. 1801-1849) was aware of the superiority of Europeans in technology and modern methods of war. He sought to close this gap by importing talent and building an indigenous capability. Ranjit Singh welcomed experienced scientists, engineers, mercenaries and officers from European nations to ensure that his kingdom could withstand any threat. Besides, the Afghan kingdom, the Pathan tribes and Jihadis were threatening his western borders. French know-how became a major element in the defense of his realm. After Napoleon lost in Waterloo (June 1815) thousands of French and allied European soldiers were dismissed: the governments of Europe, including the new government of France, distrusted those who served under Napoleon. A few settled into civilian life, but most could not: fighting was all they knew, and they did not wish to waste the skills they honed fighting in three continents. Many offered their services to Asian kings who wished to modernize their backward militaries.

At this juncture Ranjit Singh accepted talented Napoleonic officers such as Jean-Francois Allard, Jean-Baptiste Ventura, Paolo Avitabile, and Claude Auguste Court into his service. Besides such officers, there were chemists, doctors, engineers and soldiers of American, German, Italian, Polish and Irish extraction also. Many foreigners were given plum roles in the Empire. Claude Auguste Court was a product of the Ecole Polytechnique in Paris and apparently knew the science of artillery. Paolo Avitabile also had considerable experience as an artillery officer. Court and Avitabile, along with the Sikh leader Lehna Singh Majithia (who possessed great skill in engineering), overhauled the Sikh artillery. They established the training program for the gunners. Court re-organized the artillery command structure and established arsenals and magazines on European lines. The existing weapon foundries and workshops (established by Ranjit Singh and Mian Qadir Baksh in 1807) were rebuilt with French know-how to manufacture a variety of high-quality guns and artillery. Ranjit Singh soon possessed a formidable artillery of about 500 pieces, including mobile horse-drawn artillery. Court was bestowed large cash awards and titles when he introduced his new shells, fuses and commenced full-scale production.

The meteoric rise of the Sikhs and the decline of the Muslim kingdoms of India had agitated many Islamic fundamentalists. The most influential of them was the popular preacher Syed Ahmed Barelvi, who hailed from present-day Rae Bareilly. In 1825, thousands of his followers from the Gangetic Plains took up his call for Jihad against infidel powers and followed him to Khyber Pakhtunkhwa. Barelvi’s Jihad was supported by many Afghan chiefs, who were usually suspicious of all outsiders. Barelvi was able to field nearly 100,000 Mujahideen and launched a five-year guerilla war against the Sikh Empire. However, Barelvi’s orthodox interpretation of scriptures and stern disregard of Afghan tribal traditions soon led to many Afghans leaving his cause. Barelvi suffered a crushing defeat in a battle with the Sikhs near Nowshera in March 1827. Later some Afghan tribes turned on Barelvi and massacred hundreds of his followers in Peshawar in November 1830. Barelvi and his loyalists now decided to move out and try their luck in Kashmir. However, a Sikh army led by Sher Singh surrounded the Mujahideen at a mountain fort in Balakot and annihilated them in May 1831.

Ranjit Singh’s French guns and artillery were widely used in such battles in the turbulent North West frontier. Artillery and firearms which performed reliably enabled the Sikhs prevail against great odds. Perhaps even more critical was the discipline instilled in the new infantry battalions by the European officers. Officers such as Ventura and Court also led campaigns into the North West frontier. However, after Ranjit Singh died, neither their weapons nor their courage could save the Sikhs from civil war and treachery. During this chaos the surviving Europeans returned to their homelands. Soon the British defeated the Sikhs and the Afghans also took back some of their lands.

The Khyber Pakhtunkhwa region is still turbulent, and weapons from many nations are still used here in the name of pacification, anti-terror and innumerable internal conflicts. History is repeating in strange ways and there is irony and dark humor in the shadow of the mushroom cloud. India’s French Mirages are the latest entrants in this theater – let us hope it is not a destabilizing element.

PS: This is my article in DNA published on March 17, 2019. Here’s the link to the original article.