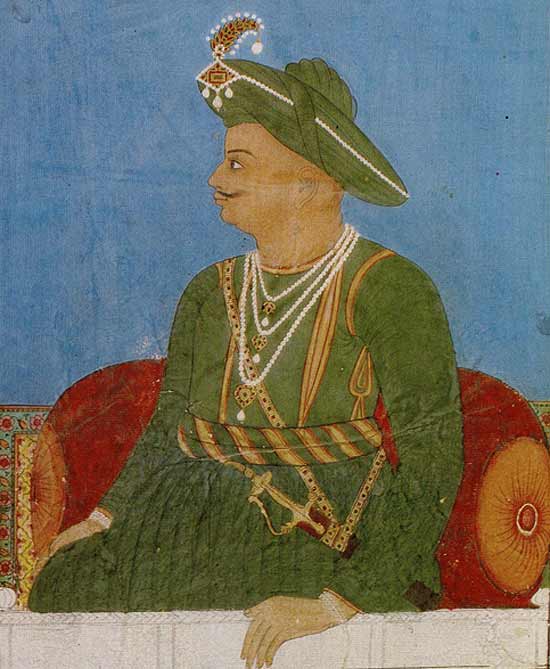 Once upon a time there was a wall that spanned the narrow breadth of Kerala from the Arabian Sea to the Western Ghats. It was not as tall or long as the Great Wall of China or Hadrian’s Wall, those great defensive lines of yore, but it was no different in function. The Kingdom of Travancore in southern Kerala built this wall to defend themselves from formidable northern foes. China’s wall defended her from Eurasian hordes and Hadrian’s Wall in northern England kept away the fearsome Picts from Roman Britain. The wall across Kerala, called the Travancore Lines or “Nedumkotta”, faced the invasion of Tipu Sultan, the Tiger of Mysore. In the first part of this two-part series we look at the creation of the Wall and the events leading to Tipu’s invasion of 1789. The second part will narrate how Tipu’s ambitions floundered at what he called “The Contemptible Wall”.

Decades before Mysore invaded, there were plans to build fortifications to protect Travancore from the powerful kingdom of Calicut. Around 1759, the great King of Travancore, Rama Varma “Dharma Raja”, perceived another threat on the horizon. He understood that Mysore could conquer entire Malabar (northern Kerala) and subsequently invade Travancore. After all, under a certain general named Hyder Ali Khan, Wodeyar-ruled Mysore was becoming increasingly powerful. Mysore’s highly mobile armies were feared by all: a strong and strategically located wall could break this juggernaut. Dharma Raja decided to build this Wall in the territories of his lesser northern neighbor (and ally), the state of Cochin. Geography, resources and supply lines decided the course of the Wall, which European sources termed “Travancore Lines”. On completion in 1764, the Wall stretched about 30 miles, from the western seaboard (from a fort north of present-day Kochi city) to the Western Ghats. Consider the physical map of Kerala – this span is a narrow gap between the sea and the hostile mountains. The enemy had little room for maneuver and would be funneled towards the Wall. Some believe that ancient fortifications long existed along this gap, and that Travancore simply built over these.

In 1761, Hyder Ali deposed the Wodeyar dynasty and became Sultan of Mysore. He had previously conquered parts of Malabar for his former patron. He now decided to annex entire Kerala to control the spice trade and to claim Kerala’s wealth. Between 1761 and 1778, multiple invasions and suppression campaigns brought Malabar under Hyder Ali. Some military campaigns were led by Hyder’s heir, Prince Fateh Ali Tipu. In 1766, Calicut was defeated and her ruler, the exalted 117th Zamorin, immolated himself as Mysore’s forces closed in. Tens of thousands were killed or displaced in this period. Refugees of all religions, classes and castes poured into Travancore. Mysore had indeed become the great northern threat for Travancore – the Wall would be tested soon.

Let’s take a closer look at the Wall. It was designed and built by Eustachius De Lannoy, the Dutch commander who lost the decisive Battle of Colachel (1741) against Dharma Raja’s predecessor. De Lannoy had bent the knee; over the years he rose to become the commander of Travancore’s armed forces! He was a brilliant strategist and builder and had created bristling defenses for his adoptive homeland. His Wall was 40 feet tall and 30 feet thick. It was built with clay, mud and laterite and reinforced with stones and granite. Unlike the towering walls of old, such squat walls were better defenses against modern siege guns and mines. The Wall was protected by a trench 20-foot deep and 16-foot wide. Additionally, a thick hedge of thorny shrubs was placed beyond the trench. The Wall was well-stocked and garrisoned. It had citadels, underground tunnel networks, barracks, arsenals and supply depots. It was a great barrier to any invader coming from the north.

In 1777 De Lannoy died and his immediate successor was far less capable: Hyder Ali now tried to cow down Travancore into submission with threats and diplomacy. Dharma Raja refused and pointed out his alliances with the East India Company, Mysore’s great foe, and the Dutch (long tamed since Colachel). The enraged Sultan launched an invasion. However, he retreated just before reaching the Wall due to a sudden rebellion in Malabar and more pressing matters in the Carnatic region. Hyder Ali invaded the Carnatic in 1780, setting off the Second Anglo-Mysore War. He planned to return to Travancore once he dealt with the British. However, Hyder Ali died suddenly (of a carbuncle on his back) in 1782 and Prince Tipu ascended the throne. In 1784, Tipu Sultan and the fatigued British agreed to end the war. Tipu quietly rebuilt his strength now; he was determined to conquer Travancore and crush the British in the next war. He would get his pretext for war soon …..

PS: This is my article in DNA published on August 4, 2019. Here’s the link to the original article.