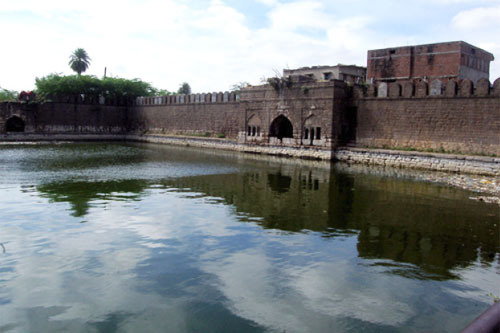 The sack of Vijayanagar, following the Battle of Talikota in 1565 CE, greatly enriched the victorious Bahmani Sultanates. Out of the five Bahmani kingdoms the one which gained the most was the Adil Shahi Sultanate of Bijapur. Besides annexing the rich Raichur Doab, the Bijapur Sultanate plundered enormous riches and captured a huge workforce from fallen Vijayanagar. Bijapur was blessed with some capable Sultans who fostered great cultural and economic growth. They expanded the Sultanate’s borders at the cost of the rump Vijayanagar Empire. Bijapur’s sultans also invited talent from across the world into their service. Soon, tens of thousands began to emigrate to Bijapur. As a result, Bijapur City, today’s Vijayapura, grew rapidly. By 1590, Bijapur became one of the most populous cities of the world. Estimates of the city’s population range from 500,000 to 1.2 million at its zenith. However, this growth posed a major challenge – Bijapur city was hitherto the bleak little capital of a middling Sultanate. It was situated in a semi-arid region. So far, the existing water sources had sufficed but now the city required much more water. Colossal hydraulic engineering projects were executed to enable this growth. It was an enormous task, but there was no lack of resources or determination.

Bijapur’s leaders understood the great opportunity – and challenge – for the capital. With Bijapur’s newly won riches, many grand projects and extensive public works were commissioned. High fortification walls (with 96 defense towers) encompassing the existing city and many adjoining villages were also built. The suburb of Shahpur was built to serve as a commercial hub for the traders and merchants who flocked to Bijapur. Shahpur hosted many businesses, workshops, storage facilities, and housed the huge transit population. The Ramalinga reservoir, a derelict ancient earthen dam was comprehensively upgraded. This reservoir was rejuvenated using jack-wells (intake constructs that tapped both surface and underground water) at the seasonal water-courses of Toravi, west of Bijapur. This enormous reservoir was replete with canals and water filtration plants. However, even this large water source was not enough.

The Sultans had to actively present themselves as the giver of water in the arid land, a spectacle that reinforces their power over the people. Ornate and elaborate fountains and water-courses were installed at the palaces, the gardens and the plazas. To serve these, headworks were built around Bijapur and a network of pipes and channels laid. Further, the geography of the land was utilized to create a network of ingenious underground water-courses, known as Qanats or Karez. Here, gently sloping channels (with a series of vertical access shafts) were used to tap the water table. This created economical and sustainable underground canals, safe from evaporation and surface threats. The Qanat water was discharged at an appropriate point on the surface, into tanks or surface channels.

Another adjoining city called Navraspur, dedicated to the arts and learning, was built in 1599. The kingdom began to clearly stagnate from the 1650s due to wars and regional politics. However, the Bijapur metropolis was still a major commercial and cultural center – and the water requirement kept growing. A 240-acre reservoir named Begum Talab was constructed in 1651. The water was supplied to the city through deep underground pipes. To prevent overpressure, 40-foot pressure release towers were built throughout the network. More reservoirs and tanks were constructed in the next 30 years. Hundreds of Baodis (step wells) were also constructed.

In the late 17th century, the Sultanate declined steeply. A major setback was the Mughal conquest in 1686. The terrible 18-month siege and the subsequent looting caused irreparable damage. However, Bijapur dragged on as a major provincial city for some time. The Mughal collapse in the 1710s-50s brought even more ruin. The city’s decline was not arrested by subsequent Maratha rule. A series of famines and military expeditions by the various Deccan powers further weakened the city. The Pindari raids and Maratha infighting finally led to Bijapur’s total collapse.  When the British took over the region in the 1820s, Bijapur was a veritable ghost town, pock-marked by ruins. Many contemporary sources, foreign and Indian, bemoaned the dilapidation of the city and its great hydraulic engineering works.

Today these ruins still attest to the past glory of Bijapur, the scale of the projects and the determination of Bijapur’s rulers. There have been interesting investigations into Bijapur’s hydraulic past by conservationists, historians, civil servants, engineers and enthusiasts these days. It is believed that the old water networks could be reclaimed to cover Vijayapura’s growing water demand.  Indeed, the Begum Talab and some Baodis were recently repaired: they now serve their city after three centuries of slumber. Perhaps much more would be possible from these great works of the yesteryears. After all, Vijayapura is a growing city in a semi-arid land – much like Bijapur before it.

PS: This is my article in DNA published on March 24, 2019. Here’s the link to the original article.