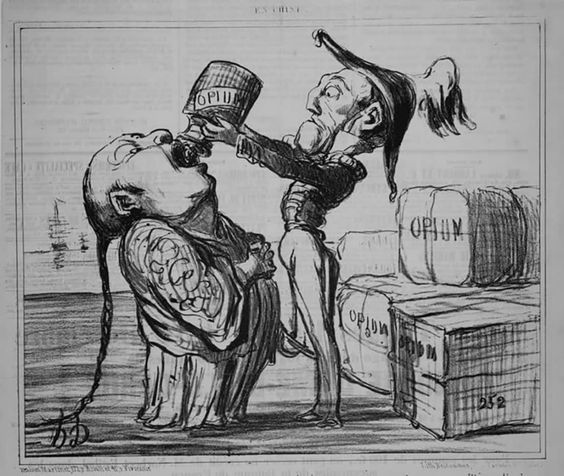 It is a bitter fact that tea became a popular beverage on the back of colossal human suffering. This author had previously written about the triangular Atlantic slave trade, in which Indian textiles and gunpowder were very essential components. Today, we look at how another Indian product, opium, was used in yet another reprehensible business – because of the surging demand for tea in Britain and the prevailing economic philosophy there. Tea and opium became part of worldwide triangular trade that greatly benefited Britain but was disastrous for everyone else involved. In this affair, sugar was a sweetener.  This triangle of tea, sugar and opium nearly destroyed Chinese society and polity and was instrumental in the rise of England as a world power.

In those days, European colonial powers adhered to the economic philosophy of Mercantilism. The goal was to be self-reliant in production; and to ensure that precious commodities such as gold and silver were amassed within national borders. Industries were run by monopolies supported through subsidies and military assistance. Methods had to be devised to pay for imports without letting depleting the stocks of precious commodities. In this context the story of tea and sugar becomes linked to that of opium.

Tea came to England in the 1630s, but for many years it was an expensive commodity as it was grown only in China. For most of the 17th-18th centuries, tea was consumed mostly by the elite, as a bitter but flavorful brew. However, tea’s popularity rose quickly. The growth in sugar consumption in Britain 18th century mirrors that of tea. Sugar was also rather expensive initially. Yet, the demand grew. To meet this growing appetite for sugar, vast plantations were established in the Caribbean islands. Here, countless natives toiled in pitiful conditions. There was also great investment in industrial process in England to yield higher production and to reduce costs. Sugar became inexpensive in the beginning of the 19th century. Now someone got the idea of mixing sugar into a cup of tea. Soon, milk was added to the brew. The demand for this new concoction exploded: a bitter brew for upper-class tastes quickly turned into a beverage coveted by the masses. This surging demand for tea – plus demand for Chinese silk and porcelain – led to much outflow of precious metals: the British authorities had to stop this somehow.

The British hoped to use the excess land revenue from India pay for tea. However, abysmal mismanagement and corruption in the East India Company (EIC) made this impossible. Bringing tea production to India was an obvious solution, but there were challenges. The British finally succeeded but that is a whole other story! It was then decided to push Indian opium into China. While India’s cotton was also accepted by the Chinese, a nation hooked on opium would yield more profits. Moreover, Indian opium was better than even Turkish opium.

After Buxar (1764), the EIC gained access to India’s opium fields in the Gangetic Valley. The EIC asserted monopoly over these. Much Indian opium was shipped to the China and popularized through various means. Tens of thousands of opium chests were shipped annually. In December 1799 the Chinese authorities banned opium. They had discovered that opium addiction was surging and the toll on the nation was heavy. The EIC now pretended that it had no hand in the opium sale in China. However, it auctioned its opium to private traders (mostly British), who transported opium in ships owned by the Company. The traders smuggled the opium for silver. Most traders deposited the silver in the Company’s factory in China and in return they were given bills payable in Calcutta or London. The Company got a commission on these bills and earned a profit. The Company then used the silver to buy tea. This trade was immensely profitable: Opium became the Company’s largest export item and accounted for 15 percent of its Indian revenue. Britain reaped huge profits and preserved precious metals, which helped industrialization and the growth of her empire. The Company’s opium and tea trade, sweetened by the addition of sugar, also changed consumption patterns.  Rising tea consumption helped sustain the emerging working classes: tea was now cheap, it was easily brewed at work itself, and it was stimulating without being intoxicating. Britain’s revenues from local tea sales were also significant. On the other hand, the opium crisis became unbearable in China and this led to the First Opium War in 1839, in which Britain won. The Treaty of Nanjing forced the Chinese to accept unrestricted sale of opium (which quadrupled soon), pay heavy indemnity, and cede the island of Hong Kong. The Chinese monarchy went into a downward spiral from this point. It would take later Chinese governments many decades and much effort to eradicate opium addiction from China’s society.

PS: This is my article in DNA published on April 14, 2019. Here’s the link to the original article.