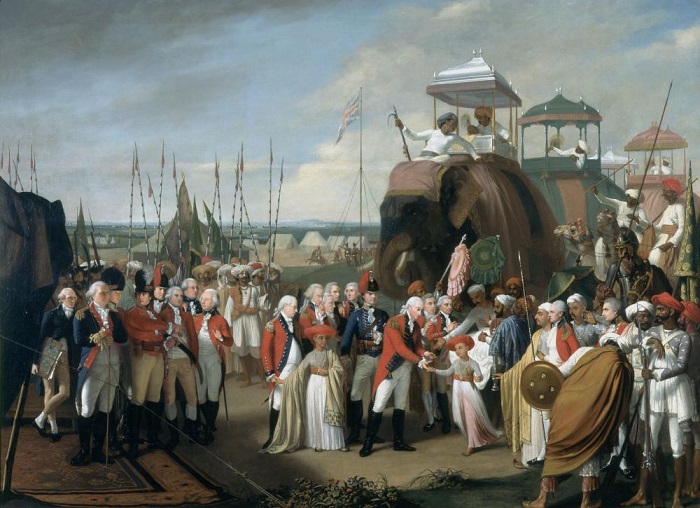 It was 1788 C.E. and the Tiger of Mysore, Tipu Sultan, was ready for another war. Four years ago, a weary Tipu and the equally battered British agreed to end the 2nd Anglo-Mysore War. But now he set his sights on Travancore, the kingdom that defied his father. Control over Travancore meant control of the spice trade, and incredible wealth and resources. Mysore had conquered northern Kerala already, but thousands of wealthy and prominent natives, along with vast treasures, had fled to Travancore. The recurring rebellions in Malabar clearly enjoyed Travancore’s backing. Moreover, Travancore was a long-time ally of the British. Travancore had to be subjugated first to end British power.

Tipu Sultan tried to force Travancore’s submission through threats and diplomacy. His pretext for war was the existence of the Travancore Lines fortifications in Cochin, Travancore’s northern ally. Tipu claimed that Cochin was his vassal as it once paid tribute to Mysore (during his father’s reign). Therefore, Travancore’s “illegal” Wall must be demolished. Travancore’s king roundly dismissed these claims and the furious Sultan immediately launched his invasion.

In December 1789 Tipu marched from Coimbatore with 40,000 troops. Mysore’s army was feared by all: Travancore’s forces were no match. Fortunately for Travancore, her commander was the remarkable Dewan, Raja Kesavadas. Born in 1745 into an inconsequential family, Raman Kesava Pillai proved his genius from childhood. His skills, and plain chance (there is a story straight out of a fairytale here!), soon brought him into the king’s service: his subsequent rise was meteoric. He became proficient in many languages and distinguished himself as an administrator. He also gained much military experience under De Lannoy and other prominent generals. In September 1789 he was appointed Dewan. Expecting Mysore’s invasion, he shored up defenses and sought assistance, but the British Governor of Madras reacted dismissively, sending only a tiny reserve force.

On December 30, 1789, Tipu attacked the Wall, which was personally commanded by the Dewan. Tipu personally participated in the assault, galvanizing his army. By nightfall Mysore troops surged in and almost captured a prominent citadel of the Wall. However, 20 warriors hidden in a corner of the citadel suddenly emerged and poured heavy fire at the flank of the massed assault force. In the carnage and darkness, the invaders believed that they were ambushed by a huge force. Confusion and panic swept across the ranks. The defenders on the ramparts now regrouped and fired heavily at the massed enemy. Losses were high in the ensuing rout. Tipu gravely injured his leg, which apparently never healed completely. He was forcibly carried away by aides as he refused to flee. Tipu’s palanquin, sword, signet ring and jewelry were captured during Mysore’s headlong rout.

Tipu Sultan now swore to destroy “the contemptible wall”. He renewed his assault two months later after bringing reinforcements and bigger siege guns. Travancore appealed again but the British refused.  This time, Tipu focused his siege artillery on a section of the Wall, which soon collapsed under withering bombardment. Kesavadas pulled back his troops from the breached sector as enemies poured in. After a month-long contest, the entire Wall was captured. Tipu chased the fleeing Travancore troops and pillaged widely. Around May, he reached the Periyar River. As Tipu’s forces began to cross a ford, Raja Kesavadas sprung a surprise. His soldiers demolished a major barrage upstream; the ensuing flash flood swept away many troops and drenched Tipu’s gunpowder stores. As Tipu reeled from this setback, a heavy monsoon descended. Diseases broke out and supplies were contaminated. At this juncture, Governor-General Lord Cornwallis replaced the callous Governor of Madras with a more pro-active officer. Allying with the Marathas and the Nizam, the British attached Mysore. The 3rd Anglo-Mysore War had begun.

Tipu raced back to save his heartlands. But first, he ordered the Wall’s destruction, and symbolically struck the first blow. In six days, the entire Wall was demolished. Raja Kesavadas now sent detachments to harass Tipu’s retreat and assist the British. Tipu fought well but soon Lord Cornwallis himself took command. A string of crushing defeats forced Tipu to capitulate on February 1792. Tipu had to pay heavy reparations, cede half his lands and send his sons as hostages. With the British acquiring Malabar, Salem, and Dindigul, Tipu ceased to be a threat to Travancore.

The Sultan and the Dewan soon suffered grim fates. Tipu died fighting the British at the walls of Srirangapatna in May 4, 1799, apparently betrayed by his closest officers. Raja Kesavadas preceded him in death by a fortnight – beggared, imprisoned and certainly poisoned by treacherous courtiers of a new child-king. Though very little remains of the Travancore Lines today, the names of many towns and villages in the region indicate the indelible mark that the Wall and Tipu’s invasion left on public memory.

PS: This is my article in DNA published on August 11, 2019. Here’s the link to the original article.